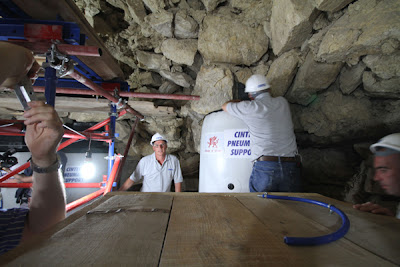 “A Welsh engineering firm that has been involved in restoration work at Buckingham Palace and the White House is helping to save the world’s first pyramid in Egypt.
Enlisted to restore the ceiling of the burial chamber of the Pyramid of Djoser, also known as the Step Pyramid, which was at risk of collapse following an earthquake in 1994, Cintec International, the British structural engineering company behind the works, is now in the second stage of the advanced process which began in January 2011. (...)
The company, based in Newport, Wales, has maintained structures such as Buckingham Palace, Windsor Castle, Ironbridge Gorge and countless castles and churches in the UK. It has also worked on the White House and the Chicago Board of Trade Building in the USA and the Canadian Parliament Building using its highly advanced and innovative engineering systems.
The latest stage of the pyramid work, which is worth £1.8m, follows the stabilisation of the ceiling using specialist Cintec airbags, and involves testing a lime grout mixture compatible with the interior of the pyramid and pointing this around the jagged stones in the ceiling to stabilise individual stones.
These stones are then drilled and a specialist anchor inserted 4m or more into the structure to knit the stones together, thus preventing further collapse and protecting the structure for hundreds of years.
Peter James, MD Cintec International, said: "As well as preventing its collapse, the aim of the project is to allow the public inside the pyramid’s burial chamber, allowing the iconic structure to be fully appreciated once again having been closed off for many years."
(source : Global Trader)
Publié par Marc Chartier à 14:29 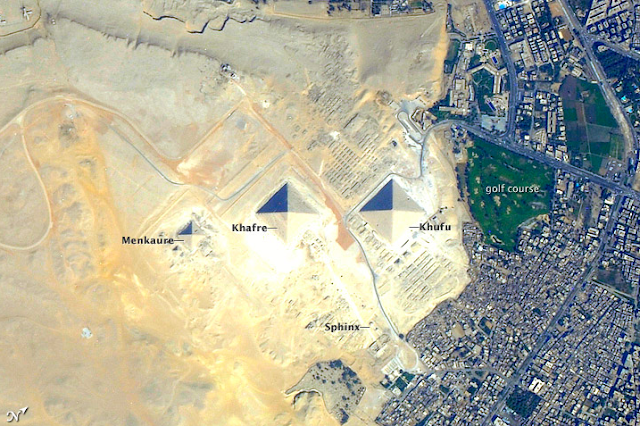 "The Great Pyramids at Giza are the last of the Seven Wonders of the Ancient World that still survive, as well as a favorite photography subject of astronaut's in orbit, according to NASA.
The image of the pyramids above is a subset of a larger image taken on July 25 by an astronaut aboard the International Space Station (ISS) with a long focal-length lens to provide high magnification.
In the image, the southeast-facing sides of the pyramids of the pharaohs Khufu, Khafre and Menkaure are all brightly illuminated by the Sun, while the northwest facing sides are in shadow.
The angling of the sun and the shadows also highlight smaller pyramids nearby, as well as rectangular, flat-roofed mastabas (tombs) to the east and west of Khufu's pyramid. These were the burial places of prominent people during the time of the ancient pharaohs.
To the southeast of Khufu's pyramid, the head and rear haunches of the Sphinx are also just visible, a NASA statement points out.
Modern Cairo stands in stark contrast to the light, washed-out colors of the pyramids and desert, with its densely packed buildings and roads.
The image was taken by the Expedition 32 crew of the ISS."
Our Amazing Planet
Publié par Marc Chartier à 09:13

"See the 'Google pyramids' up close", by Alan Boyle 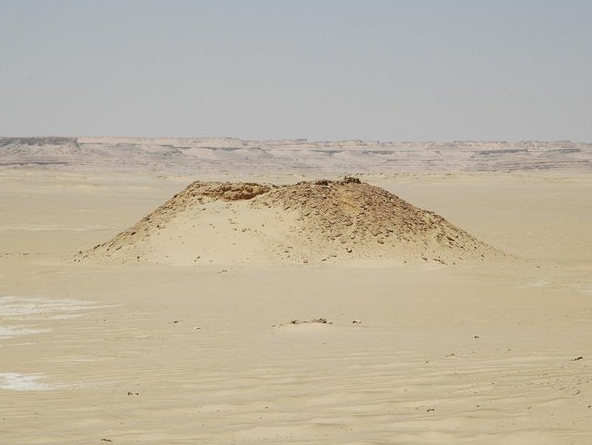 "The place that went viral last month as the potential site of a mysterious Egyptian pyramid looks more like a series of mounds on the surface of Mars when you see it up close. Three weeks after the Dimai archaeological site burst into the spotlight, it's become a lot less mysterious — but there are still secrets to uncover.

The site has been familiar to Egyptologists since the 1920s: It's thought to have been the locale for a desert settlement going back to Egypt's Ptolemaic era, when Greek and Roman influences were on the ascendance. Did these mounds serve as watchtowers, or tombs, or well sites? That's what the Soknopaiou Nesos Project wants to find out. One of the project's directors, Egyptologist Paola Davoli of Italy's University of Salento in Lecce, filled me in about the current state of her group's research last week.
"For sure they are not pyramids, but their date and use are still not known," she told me in an email.
Since last week's exchange, Davoli has sent me these pictures of the site, taken during a 2006 survey.
Davoli has also been in touch with Angela Micol, the North Carolina researcher who turned the spotlight on Dimai last month via her Google Earth Anomalies website. Based on the satellite imagery, Micol suggested that the mounds might represent eroded pyramids. The up-close pictures make the formations look more like piles of rocky rubble. The largest one appears to have the ruins of a square building or walls on its summit, but it'll take a full-blown excavation to unravel the mystery."