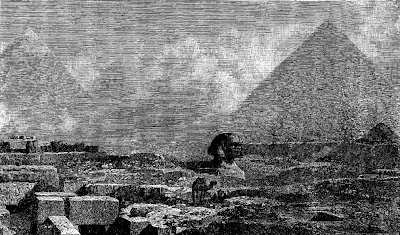 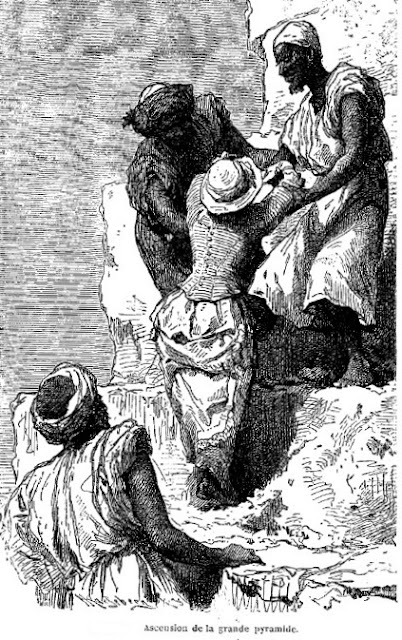 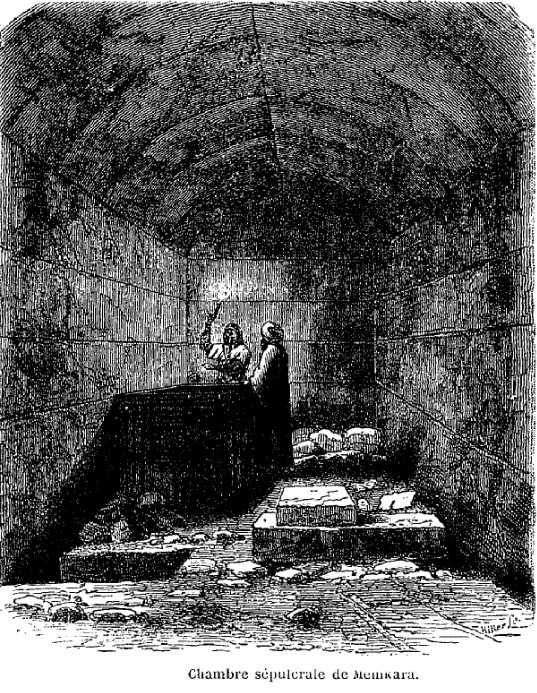 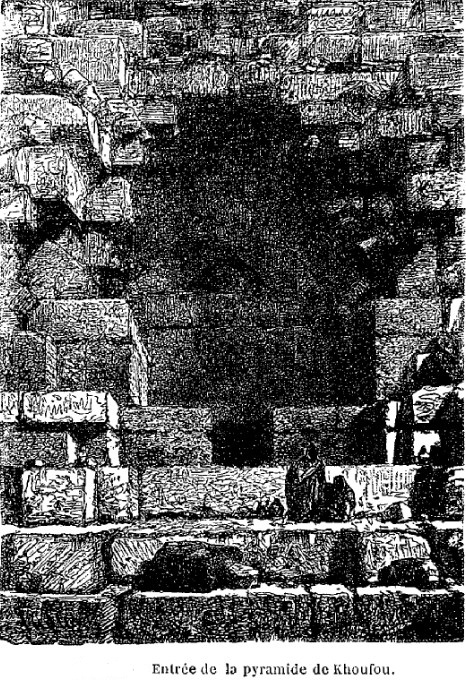 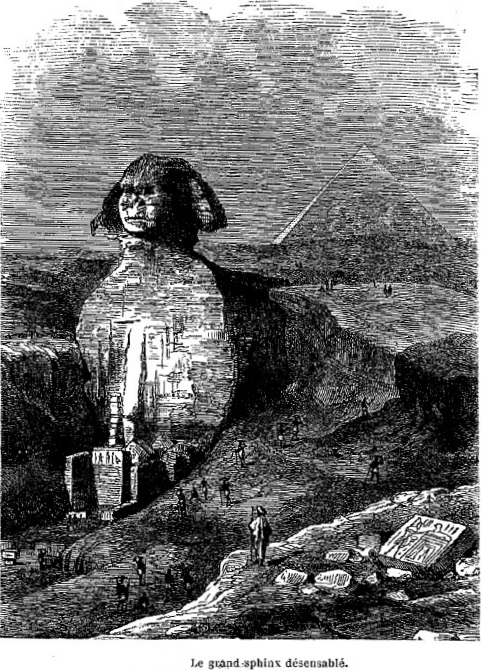 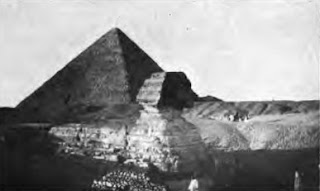 “Various theories have been advanced to account for the extraordinary magnitude of the Fourth Dynasty pyramids as contrasted with those of later times. Most interesting of all, though probably fallacious, is the one which holds that these pyramids were matters of accretion - that is to say, that each king began his monument on a modest scale and added to it year after year, so that the resulting pyramid would be directly proportionate to the length of his reign.
The trouble with this is that several kings, whose reigns were of respectable length and fairly comparable to those of Cheops and Khephrên, did not leave pyramids as large as theirs. And moreover, as will be seen by referring to the drawing of the Great Pyramid in section, such an hypothesis seems irreconcilable with the arrangement of the interior passages. True it is that alterations were made in the internal design as the work advanced, but so far as appears, even the original plans called for a pyramid but little smaller than that which was finally built. The point at which the tomb-passage enters the rock of the plateau appears to fix the lower limit of size in the case of the pyramid of Cheops - and it is no modest pile, even then. Therefore, while the accretion theory is by no means dead and still finds a degree of favor among students, it seems highly improbable that it can be relied on to explain the case.
From the indications it seems necessary to assume that Cheops from the first planned a structure very nearly as large as the one he actually completed ; and plausible to account for the subsequent falling-off in size in the other monuments as due to excessive costs or possibly a failure of engineering skill. 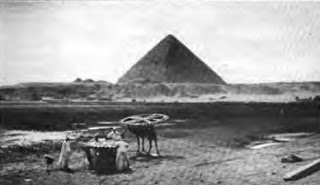 The latter factor in the time of Cheops was indeed marvelous, as is revealed by the nicety of measurement and accuracy of orientation. The error in attempting to make the front of the tomb face the true north is practically negligible, and the same is said to be true of the slight errors in placing the four comers. Considering the primitive tools and the configuration of the land, which precluded direct sighting, the results attained were extraordinary, and could not be bettered, even if they could be equaled, by modem engineers. As for the fitted blocks of the exterior casing, while few remain, it is possible to see that their joints were of amazing accuracy, and the work in the casing of the inner hall is frequently compared for minuteness of exactitude to the best work of modem opticians. (...)
A glance at the plan of the pyramid of Cheops will serve to show more of its arrangement than a visit to its depths. A steeply descending passage leads down to a sepulchral chamber deep in the native rock. That is not shown to visitors. Instead, one takes the ascending passage that leads up to the very centre of the pyramid, part of it spacious and lofty, but most of it abominably cramped and low. Up this incline it is supposed the body of Cheops was carried on the last day and laid to rest in the huge sarcophagus that still occupies a place in the " King's Chamber". Then the huge plug blocks of granite which had been prepared were let down to bar future entry, the narrower passages were (perhaps) filled with rubble, the workmen escaped by the roughly vertical shaft to the lower passage in the rock below, the entrance in the outer casing was smoothly closed - and theoretically the grave-robbers were forever foiled ! Practically the tomb was rifled within a few hundred years - possibly even during the period of unrest that closed the Old Kingdom's career in the Ninth and Tenth dynasties. The labor and cost had been all in vain. Cheops and the rest had erected for themselves tombs that would endure for centuries, probably for all time, but their bodies were no more secure at the last than if they had been laid in the humblest grave.” 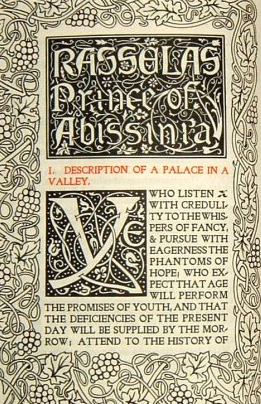 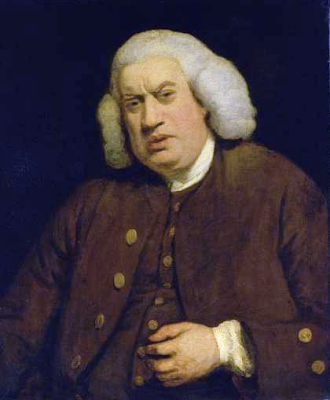 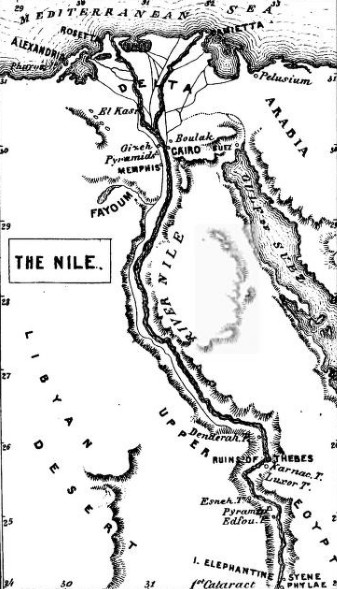 “Ten miles south-west of Cairo, on the western side of the Nile, and about five miles from the river, lie the ever-memorable pyramids of Gizeh, or Jizeh. They are built on a bed of rock, one hundred and fifty feet above the level of the surrounding desert, being a projection of the Libyan chain of mountains. This elevation, their immense size, and the clearness of the atmosphere, render them visible at a great distance.
The purpose of such massive piles of almost solid masonry is scarcely yet satisfactorily discovered, it being difficult to conceive of them only as the burying-places of the kings. Many various conjectures have been entertained respecting them, but this is after all the only one supported by evidence.
The principal pyramids are three in number, that of Cheops, or Suphis, being the largest. The ascent of this on the eastern side is easy, and there is a space at the top of thirty-two feet. The stones that formed the apex have been removed, and also the outer casing of the pyramid, in order to build the numerous mosques of Cairo. (...)
A hundred thousand men are said to have been employed for twenty years in the erection, and it is reckoned to have required six million of tons of stone. The pyramids are built due north and south, and were erected in steps and terraces for the convenience of the builders, who advanced from stage to stage by scaffolding, and smoothed the face with an outside casing as they descended. For the most part, the pyramids are solid masonry.
Caliph Mamoon, A.d. 820, first opened the great pyramid. The entrance is on the sixteenth step on the northern side, and, to deceive the seeker, it is placed twenty-eight feet from the centre. The caliph expected to find treasure, and for fear of disappointing and exasperating his workmen when no gold was found, sufficient was taken into the pyramid to cover the expenses of opening, and was then reported to be found in it. The Arabs tell a story of a statue being found in a sarcophagus, and with the statue a body, having a breastplate of gold and jewels, and an inscription in characters which no one could decipher.
There are passages and small chambers inside the pyramid, and in one of the latter the sarcophagus yet remains. When struck, it emits a sound like a bell, and from the fragments broken off by Europeans, it will very soon become transported piecemeal to Europe. It is found in one of the chambers called the king's chamber. No hieroglyphics have been discovered on it, but colonel Vyse found the name of the king from whom this pyramid is called in the stones of the upper chamber. There is space enough in the pyramid for 3,700 rooms of the size of the king's chamber, leaving the contents of every second chamber solid by way of separation.
The second pyramid, that of Cephrenes, is very similar to the first. It was opened by Belzoni, in 1816, and a sarcophagus was found sunk in the floor, containing the bones of an ox. Both pyramids, however, had probably been long ago visited by the Arabs, and despoiled of any contents which might appear valuable.
The third pyramid was opened by colonel Vyse. It contains a chamber, with a pointed roof, in which was a stone sarcophagus, which was lost at sea by the wreck of the vessel which transported it. The wooden coffin, with the name of the king inscribed on it, is one of the most valuable antiquities deposited in the British Museum. The name of the king is Mykerinus. Although this pyramid was only about half the size of the other two, yet it was the most beautiful, as its outer casing was of granite.
Besides these three pyramids, there are several others in the same neighbourhood, of inferior dimensions, and also many tombs. In one of these tombs, probably as old as the great pyramid, are representations of persons engaged in various trades, carpenters, boatmakers, etc., and persons eating, drinking, and dancing. (...)
The fourth dynasty is one in which we begin to emerge into the light afforded by existing monuments. It is remarkable for the number of the princes of which it is composed, and for the length of their reigns. The first three kings of this dynasty were the builders of the pyramids of Gizeh, and around these stupendous structures, which served as their own tombs, are to be found the burying-places of their descendants and companions. The names of the builders, in harmony with Manetho's list, have been discovered on the three pyramids by colonel Vyse. At this early age of the world's history, the arts of building and of design seem to have been as fully understood and as skilfully practised as in later ages.”
Publié par Marc Chartier à 06:00