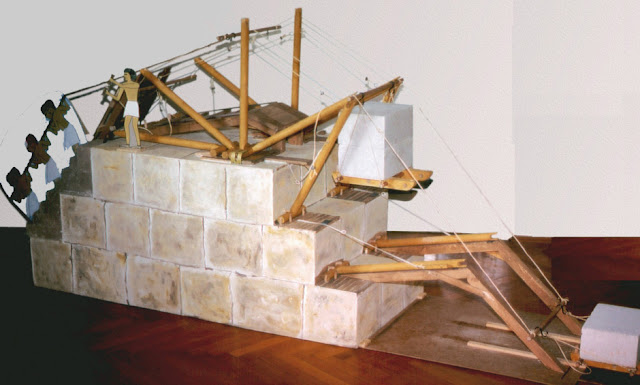 
"The Egyptians must have known about clay brick ramps. Pulling objects on a slanted surface with a sledge and the inclined lift with sliding ramps, with which granite blocks and the pyramidion were pulled up the pyramid wall, is not imaginable without clay brick ramps made of dried ‘clay and straw’. The right material and a dry climate must have existed for constructions, ramps and causeways made of clay bricks. (...)
Reports from the times of the pharaohs confirm the use of a slanted plain to pull up building materials. For instance, a papyrus text exists in which the construction of a clay ramp is mentioned. Furthermore, remains of various ramps near Giza, south of the Chephren pyramid, in the courtyard of the Temple of the Sun by Abu-Gurob (5th dynasty), by the pyramid in Lisht (12th dynasty ) as well as the remainders of clay brick scaffolding on one side of the first pylon of Karnak also bear testament.
But what was done with these clay brick ramps that still partially exist today ? And what is the meaning of the considerable remainders of a steep clay brick ramp that still exist inside the temple area in Karnak behind the great Pylon in front of the huge Temple of Amun ? Even if one had used the entire available space of 80 meters (the length between the Temple of Amun and the Pylon) for the ramp, the pylon's height of 34 m would have caused a ramp angle of 30° to be overcome. And that would have been too much for any team to pull a sledge up. This is therefore indirect proof of the fact that the Egyptians must have used hoisting gear chains and/or lifts. It is astonishing that the pylon in Karnak was actually built later, namely in Ptolomaic times, according to information provided on site. Greeks and Romans used the construction techniques with cranes and invented by them for their buildings. It was therefore not until those times that Egyptian construction know-how was actually forgotten.
Therefore all the prerequisites for an inclined lift were given.
(...)

The construction of the Great Pyramid of Giza - Construction time, population and building work


A stone slab could be transported from pyramid step to pyramid step in two minutes with the Herodotus hoisting gear of the first generation which was also moved from step to step. Accordingly, several stones were always moving at the same time. If the pyramid already had 30 steps one would require 60 minutes to transport a stone from the base to the upper platform. Therefore 60 teams of 200 people each were required if each man could pull with a strength of 150 N. The pyramid must have been covered with people. Herodotus wrote that 100,000 men had to work on the Great Pyramid of Giza for 20 years. The number of 100.000 men not only refers to the people working directly on the pyramid, but includes the entire pyramid construction process, including the entire industry that was directly or indirectly involved in pyramid construction or the associated irrigation projects.
(...)

The hoisting gear in the quarry


None of the numerous pyramid-construction theorists have far contemplated how the stone blocks could be heaved onto the sledges from the 60 cm wide trenches. Lifting the stone blocks with simple levers is not an option as it would take to long if an average of one stone block per minute is to be achieved. Consequently, the stone blocks will have to have been lifted out of the quarry with some kind of hoisting gear, which can stand in the quarry on its feet and has a rope crosshead die with a much higher static friction coefficient than the Mykerinos stone. Because, here in this real excavation site with mud and water in the ditches, and lubricants all over the place on the skids of the sledges and the planks placed beneath them, the ropes will be wet and slippery and should not slip over the head of the hoisting gear when trying to lift up a stone block. Figure 1 shows a model of the hoisting gear with a lime sand brick of size 30 x 24 x 11.5 cm (weight 15 kg), i.e. on a scale of 1:4 compared to the real stone blocks that were used.
The hoisting ropes are wrapped around a tree trunk once. This causes the sticking friction to increase so much that rope slippage around the tree trunk is unimaginable. In the process, the stone block is jammed between two beams. 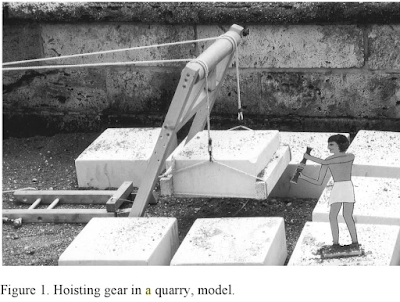 Figure 1 clearly shows how the stone block is jammed between two beams. This occurs automatically when lifting the block. The jamming procedure is simple. First, the two beams are placed left and right of the stone block that is to be lifted. These are then tied together with a rope. Then the rope is grasped with a load hook which is located at the end of the hoisting ropes. If the team now pulls, the beams by the stone block will be strained and the block can be hoisted up. This assumes that the block was already detached from the underlayer with wedges. As the blocks are heavy, the hauling team will have strained the ropes before the wedges are rammed in so that the block can be easily broken off.
The sledge is then pushed underneath the stone block.

Rationalized method according to Herodotus


The hoisting gear used for breaking off and lifting up stone blocks in the quarry was also used in pyramid construction after being developed further, so that the large stone blocks could be lifted up step by step without the load having to be put down or the system of hoisting gears having to be stopped. For that purpose, the large, round trunk at the head of the quarry hoisting gear was lubricated and placed in a wooden sliding sleeve in the groove of the pyramid step as a pivot. (...)
In this way the team could not only lift up the stone block with the wooden hoisting gear but also lift it up with a rope from one step to the next. With the help of guiding rails the load could be seamlessly passed on from one hoisting gear to another hoisting gear located on the next step. The two foot ends of the quarry hoists were converted into two forks that held a log on which the load - i.e. the sledge with the stone - was hanging.