“Sun-dried bricks had formed the material for building, though stone was sometimes employed in details as in Tjeser's (*) mastaba, or for the granite flooring found in the tomb of Den-Semti a king of the 1st dynasty. But it seems to have occurred to Tjeser to substitute stone for brick, for another monument built by him consists entirely of limestone. It was by no means unusual for kings to have a second tomb, a custom originating possibly in the desire that the so-called ka, or "double", should find a temporal retreat both at Abydos, where it was supposed that Osiris was buried, and at some other site associated with the life or death of the deceased ruler ; though it is not always clear which is the actual sepulchre and which the secondary one. Tjeser accordingly built a stone mastaba at Sakkara, near Memphis, on which, it is assumed, he afterwards imposed another of smaller area, and repeated the process as time went on, until he had produced what is known as the Step-pyramid. It has altogether six stages of a total height of 195 feet, and the area of its base is 390 from N. to S. and 347 from E. to W. 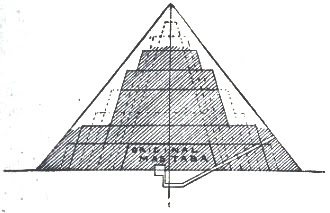 Supposed formation of the pyramid of Medûm (Petrie)The original mastaba was surrounded by a stone casing, and another smaller mastaba was erected on the top, leaving a ledge all round. The process was then repeated till the topmost addition was quite small when the ledged surfaces were filled up to form planes.

The fashion thus set was followed by Senefru, the last king of the IlIrd dynasty, who built himself an imposing tomb at Medûm, between the Nile and the district known as the Fayum, in which he was afterwards buried. It was constructed, like the Sakkara step-pyramid, of a series of mastabas, but the sides were filled out so as to form a continuous slope, and thus the first real pyramid was produced. It was afterwards partially destroyed by Rameses the Great, who used the fine stone of the casing for buildings of his own, and the existing structure is only the core of the original monument. In front of the east side is a small chapel which is the oldest known temple in Egypt. Senefru is also supposed to have built another pyramid at Dâshûr, nearer to Memphis. It is possible that it is the one the sides of which have two planes of inclination, and which, as it is almost unique, may be assumed to be an experimental form of the type which attained such perfection under the next dynasty.
The pyramid, evolved in this manner, became the type for royal monuments during the early Memphite dynasties, but for less exalted persons of distinction the mastaba continued in use, preserving generally its outward form though internally it often received a good deal of architectural decoration. Hundreds of such tombs, as well as many pyramids in various states of preservation, fill the western side of the the Nile Valley above Memphis, and form probably the largest necropolis in the world. It extends from Abu Roash on the north to Dâshûr on the south, including the plains of Giza, Abusir and Sakkara, a length of fifteen miles with a width of from two to two and a half miles.
At Giza the mastabas are methodically arranged in regular ranks with their longer axes due north and south, but at Sakkara the arrangement is less regular and they sometimes encroach on one another. Within each is generally found a comparatively small interior chamber serving as a shrine or chapel, and annexed to this is a walled-up cell, or more than one, in which a statue of the deceased was deposited, not as a visible memorial but rather as a guarantee that the ka or double might find its mortal counterpart still whole and undecayed. This faith in the prolongation of the conditions of earthly life which so strongly characterizes the Egyptian race is further illustrated by the custom of depositing, within or outside the tomb, food and drink and models of objects associated with the former existence of the dead. (...) 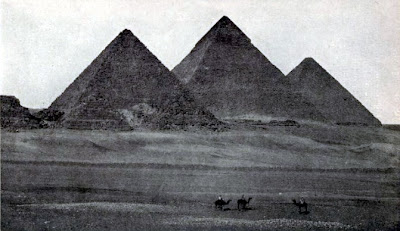 The pyramidal development of the mastaba by Senefru led to the adoption of this form by the kings, and culminated in the three great pyramids of Giza, the tombs of Khufu (Cheops) Khaf-Ra (Chephren) and Menkau-Ra (Mykerinos) of the IVth dynasty. These magnificent monuments exhibit grand architecture in its plainest form ; yet simple as is their design it is by no means wanting in interest or variety, for their quadrangular plan, whilst ensuring perfect symmetry, gives the intersections of their sides a constantly varying angle as the point of view is changed. Moreover, their impressiveness is increased by their situation on a rocky plateau which is some 150 feet above the level of the Nile and the cultivated area. 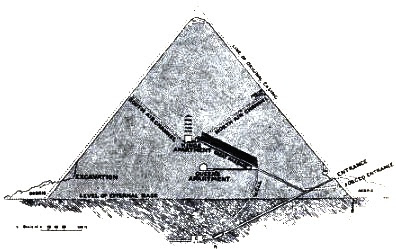 The largest and oldest, that of Khufu, is about 775 feet on each side, and when it was intact was about 480 feet in vertical height. That of Menkau-Ra, the smallest and latest in date, is about 346 feet square and 215 feet high. The intermediate one, of Khaf-Ra, is only a few feet less in height than Khufu's and from some points of view looks the highest. Except for the small internal chambers and the galleries which led to them, they are solid structures, chiefly of limestone brought from the quarries on the east bank of the Nile. When perfect they had smooth external surfaces, the remains of which are only visible on some of the upper courses of that of Khaf-Ra, the rest having been removed for use as building material in the modern Cairo.
There was an entire absence of minor architectural features, and the entrance in each case was carefully concealed by the casing, which consisted of blocks of stone, fitted on the stepped courses which are now visible, with the outer surfaces carefully chamfered to the required angle. So far as workmanship is concerned they show a complete command of method and material, for in the geometrical exactitude of their laying out and in the fineness of their jointing they are not surpassed or even equalled by the work of any later period.
The internal arrangement of the galleries and the position of the sepulchral chambers varies in each pyramid. In that of Menkau-Ra, which is built over a depression in the bed-rock, the tomb-chamber is below the level of the soil, but in the case of Khufu's it is in the centre of the mass, and there is another which is known as the Queen's Chamber (though it has no sarcophagus within it) at a somewhat lower level in the pyramid. There is a still lower chamber, below the level of the soil, approached by an absolutely straight passage sloping down from the entrance, the use of which is not apparent. About sixty-three feet from the entrance of this descending passage another gallery branches upwards to a point at which a level passage leads to the "Queen's Chamber", and from the same point a great gallery 28 feet high and 151 feet long ascends to the King's Chamber. The smaller galleries are roofed by inclined stones which meet in an internal ridge so as to diminish the vertical pressure, but the great gallery is covered by corbelled courses of stone which gradually approach and meet above. The stones of the side walls are admirably fitted together so that the joints are scarcely visible. 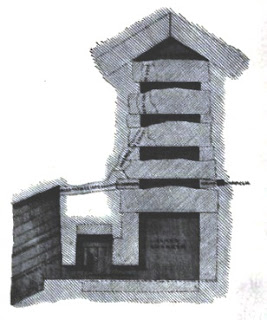 The King's Chamber, which is 34 feet 6 inches long by about 17 feet wide and 19 high is covered by flat slabs of granite, and the walls, are of the same material, very finely jointed. It contains an empty lidless sarcophagus massively hewn out of a block of red granite without ornament or inscription. Above the King's Chamber is a peculiar arrangement of five cavities separated by horizontal blocks, the uppermost being covered by two inclined rows of stone rafters, with the object of diverting the pressure from the ceiling of the chamber. (1)
The galleries are all constructed and concealed with a view to secure the tomb from violation and at certain points are intercepted by huge plugs of granite which were inserted from above in order to place what seemed to be insuperable obstacles in the way of any depredators. In some cases it was only by excavating new approaches that these obstacles were circumvented.
It is evident from the care and labour which were expended on these vast monuments, that they must have been erected during the lifetime of the kings whom they commemorate and the Prussian egyptologist Lepsius, who conducted an archaeological expedition to Egypt in the middle of the last century, promulgated the theory that they were enlarged at successive periods in accordance with the length of the reigns of their builders, as was almost certainly the case with those which originated in mastabas. Without accepting this theory as literally as some more recent German writers, Dr Borchardt came to the conclusion that the Great Pyramid actually received additions to the dimensions originally planned, and this fact may explain the existence of the lower untenanted chambers which were superseded as the structure was enlarged.
The pyramid of Khufu has on its east side three smaller pyramids, which were the tombs of members of his family, and is surrounded by many mastabas. There are also three small pyramids on the south side of that of Menkau-Ra.The height of these smaller monuments varies from fifty to seventy feet. It was usual to surround large pyramids with a paved enclosure, and in some cases a causeway leading from the Nile to the enclosure was constructed apparently before the building was begun. (...) 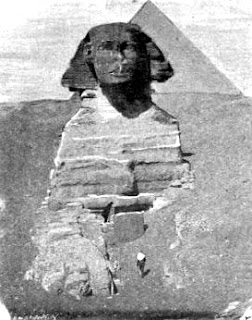 The gigantic figure of the Sphinx, which is 140 feet in length and 66 feet high, when not partly covered by sand, lies about 540 yards to the east of the pyramid Khaf-Ra with whom a late tradition associates it. It was carved in situ from a natural mass of rock, the apparent height of which is increased by the surface of the surrounding ground having been removed ; the body is a good deal weathered, and has the appearance of having been patched up with pieces of sandstone. The human head was formerly painted red, and had the conventional beard common in royal portraits, but is now much mutilated ; on the breast between the forepaws there is a small open shrine with an enclosed space and an altar in front. A paved court farther in front with steps leading down to it is said to date from the Roman period.
The figure was an object of veneration for centuries, and there is a record of its repair by Thothmes IV of the XVIIIth dynasty, but the date of its first carving is doubtful. Mr. H. R. Hall assigns it to the Xllth dynasty, but it seems unlikely that the block was left untouched by the pyramid builders of the IVth dynasty, and it is probable that the tradition connecting it with Khaf-Ra has some foundation. (...)The body of the Sphinx is perforated by a shaft from the centre of the back indicating an earlier grave below it, and as there are no tombs in the immediate neighbourhood older than Khaf-Ra's reign, it may be taken for granted that the Sphinx is not of earlier date.”

(1) Such expedients show that the principle of the radiating arch was not commonly recognized at that period. The earliest arch hitherto found is, however, assigned to the IlIrd dynasty and is of somewhat rude construction.