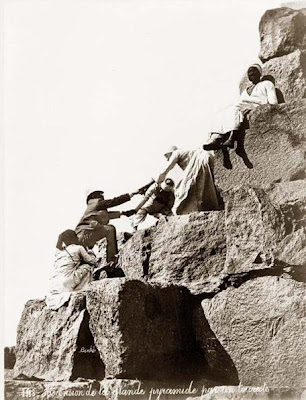 Photo de Felix Bonfils (1875) - Wikimédia commons
“You, like every one else, have heard and read of the height and dimensions of these stupendous monuments, and the accounts vary so little, and are so generally correct, that you can rely on them with great confidence. Yet, notwithstanding all the measurements were previously as familiar to me as are those of St. Peter's of Rome, the effect produced upon the senses when standing beside a wall of stone eight hundred feet long by nearly five hundred high, unbroken by columns or friezes to lighten the heavy aspect of the mass, is, indeed, very imposing ; but, before I had time to reflect on the danger of ascending, the gentlemen hurried me onward, and I soon found myself lifted from shelf to shelf, without time to look behind me.
After about half an hour's climbing, we came to a part of the edifice where it appears attempts have been made to penetrate the interior, and a large chamber, or rather notch, had been cut in one of the angles. Here a halt was called, and all gathered at this point. It is about two thirds of the way to the top, and affords quite as fine a view as that from the summit. (...)

Quand les “degrés” sèment la discorde
There is a considerable degree of misapprehension, in certain particulars, among the best informed of those who have not visited these structures. I have often heard questions asked, and have done the same thing myself, which showed a very erroneous idea of their original form, and the present state of their exterior. The great mistake is in relation to the "steps", as they are improperly called. I always supposed that the original manner of laying up these masses of stone was first to place a broad basis, and then another layer, receding from the first, and forming a sort of step ; the next layer, and each succeeding one, receding from the line of the immediate substratum, and the whole constituting a regular flight of stairs of masonry.
No doubt this was partially the case, in order to facilitate the raising of the immense blocks of stone, by degrees, to the top. But we have ocular demonstration that, when the building was finished, these steps or projections were cut down to a plane surface, and this covered with stucco, some of which still remains near the top of one pyramid. One of these immense piles had, instead of stucco, a casing, six feet thick, of hard red granite, highly polished, thousands of blocks of which now lie scattered round its base, and several layers remain in their places above the accumulated rubbish. The material of which all these structures are composed is a fine cream-coloured calcareous stone.

Destruction des pyramides : la (première) faute à qui ?
It is uncertain who it was that commenced the work of destruction upon these most ancient of Egypt's monuments. It may have been Cambyses; but that destroyer seemed to direct his attention mostly to the idols and sculptured abominations upon the walls of the temples, all of which were so offensive to the eyes of the Theists of Chaldea. These monuments, so simple in their form, having no sculpture whatever, and originating, no doubt, from a nation and religion foreign to Egypt (perhaps the shepherd kings), contained in their outward structure and finish nothing to offend the eye, shock the prejudice, or excite the cupidity of the Persian conquerors. Not being absolute barbarians, they scarcely destroyed anything wantonly, except under the high excitement of religious prejudice or warlike fury ; and under the impulse of these, their first attention would be directed to the more elaborate works of art, and to private property.
Who, then, but the deluded Moslems were the destroyers ? The Moslems, whose cupidity had been excited by ignorance to suppose that these vast piles of masonry were erected expressly to conceal treasure. They may not have been the first to unseal the hidden entrances, for it can hardly be supposed that the Persian conqueror would pass the Pyramids by totally unnoticed ; it is more probable that he, through the assistance of some captured priests, gained possession of the secret which opened to him their interior.
When Belzoni forced his way into these Pyramids, he found inscriptions in Arabic, showing that they had been entered by a Saracen conqueror some centuries before. Nothing of great value has been discovered in them in modern times. We are told that under one of the califs an order went forth for the destruction of these edifices, and that the work was committed to the care of the most skillful engineer of the age. He wrought at it for a long time, expending much labour and treasure, and finally gave it up. Of course he had no gunpowder.

De l’art et de la manière de détruire le revêtement d’une pyramide :
de haut en bas ? ou de bas en haut ?
The engineer began at the top ; but how he got there, up the smooth plane of five hundred feet, is beyond my comprehension, unless by cutting a flight of steps from the bottom. There he first pryed loose and cast off the apex; and then entering his lever between the interstices of the topmost layers, they, of course, came down faster than the cars down the Montagnes Russes at Paris, or the artificial ice-hills of St. Petersburg. If each stone had been tied to the necks of a regiment of these Vandals, I should desire to have been there to give it its first impulse, and would have felt as if I was doing a favour to posterity with each stone that I helped over.
When the area of this vertical breach became of considerable extent, the engineer appears to have given up the attack on the top, and begun upon each of the sides, working downward, to throw off the outer crust or shell of the edifice, in the hope of finding other yet unexplored entrances and chambers. His patience did not give out until, arriving at the bottom, he had flayed the whole pyramid ; but his utmost efforts could do nothing more than make a skin wound upon these colossi. One of the pyramids has a considerable portion of its outer surface, near the top, entire, and from thence to the ground it is in the same flayed state as the others ; by which it would appear, that in that instance the work of devastation was begun from below. From these remarks, you will observe that nothing can be farther from the truth than the idea that there was a series of regular steps for ascent, in the original plan of either of these pyramids. Therefore, if the present ragged surface presents a means of ascent, you must not suppose it to be without danger. In fact, the greater part of the four sides of each is not at all practicable, and it is now only at one of the corners or angles that an ascent to the top is ever attempted. (...)
Endeavouring to abstract my ideas from the contemplation of this city of the dead, my thoughts would constantly recur to its stupendous monuments. Passing over the countless minor erections and excavations of the great families of the Pharaohotic age, the mind dwells with awe upon those artificial mountains of stone, cemented with the blood of a hundred thousand victims, and built for the mere purpose of hiding the body of an individual, while its soul was performing the descending and ascending series of transmigrations, until, its appointed cycle revolving, it should reclaim its former human habitation. From these monuments of human error and folly, my imagination carried me to the vast artificial caverns immediately beneath me, down whose perpendicular shafts I had been previously looking. I had been informed that many of them are computed to contain each a million of bodies, standing tier upon tier, until they reach within a few feet of the spot where I then lay. I inquired of myself, with such a Necropolis, what must have been the city of the living ? (...)

Rien d’intéressant, hormis un sarcophage vide
After our morning meal, we entered the great Pyramid by sliding down its granite tunnel, and climbing the inclined plane of the interior ; but as for me, I saw nothing of interest save an empty sarcophagus, which once, perhaps, contained a Pharaoh's mummy. Bats and spiders, dust and heat, made up the rest of the entertainment. I soon prayed for fresh air, and was conducted once more to the open day, satisfied that such expeditions were better suited to the taste of the antiquary and wonder-monger than to mine.


La construction du Sphinx : pas si compliquée que cela !
We next visited the colossal Sphinx, about which so much has been said. (...)
As far as it was uncovered, we could make a pretty good estimate of its dimensions ; and although it has made a great noise in the world, and its size is not at all exaggerated, yet I cannot agree that it was, as represented by travellers, so Herculean a work to execute. A notch was first cut out of the shelf of a soft rock, leaving a part of the mass insulated. This mass (a hundred feet more or less is of little consequence, when there is no question of transportation) could more easily be shaped into the form of some living or imaginary animal, than smaller blocks of stone could be brought from the distant quarry, and then piled on one another, high in the air, to compose a temple or a pyramid. A few hundred men, with some months' picking, would pare down any of our freestone hills into quite as great a lion as this same Egyptian wonder.”
Publié par Marc Chartier à 06:00