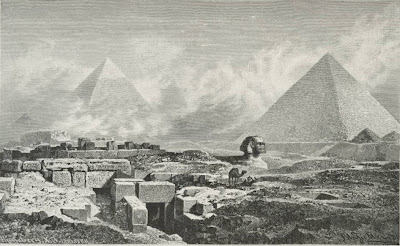 “Egypt, which, from the time of Sesostris, 1700 years B. C. to the Persian war, about 600 B. C, extended over Bactria, Aethiopia, Abyssinia, and Lybia, offers the most remarkable and important monuments for the study of the history of architecture, in her very numerous temples, palaces, pyramids, obelisks, and hypogea (under-ground buildings); and Herodotus, Diodorus Siculus, Pausanias, and Strabo certainly do her no more than justice in declaring that she surpasses all the nations of the earth in the magnificence and grandeur of her architectural monuments. (...)
The pyramids deserve the name of eternal abodes of the deceased as well as the rock-cut tombs. These structures are of Egyptian origin, although they are met with in India and in Nubia, for instance near Assur, and even in Egypt they have only been erected in the district of Fayum. and in the tract of the Libyan mountains, which is at present occupied by the villages of Gizeh, Sakkarah, Dashour, Megduneh, and El Metanjeh. near the ancient Memphis and Busiris. Of late it has been surmised that they were intended for astronomical purposes, as the direction of the different passages in the interior has been observed to correspond with certain astronomical lines.


Une quatrième pyramide, attribuée à Asychis
King Moeris seems to have been the first to erect buildings in pyramidal form ; for on digging the lake which is called after his name, he built some large structures of this kind in the very middle of it. Much later, about 1000 B.C, Cheops built the largest pyramid near Memphis, the present Gizeh ; the second was built by his brother Chephrenes ; the third by Mycerinus, son of Cheops; and Asychis, his successor, erected the fourth. These, together with three smaller pyramids dedicated to the queens of the above mentioned kings, and to the daughter of Cheops, are known as the group of Gizeh.


Caractéristiques des pyramides : matériaux, orientation, architecture, dimensions
The pyramids at Sakkarah and in the other places were built about the same time with the others. In the neighborhood of the group of Gizeh is situated the far-famed colossal Sphinx. (...) The pyramids were constructed either of bricks or of stone. The fourth pyramid, and those in the lake Moeris, belong to the former class, and have been almost destroyed ; the latter, which was originally 240 feet high, being now not more than 180. The majority of them were constructed of limestone, which was found in the vicinity, or of Trojan or Ethiopian granite. Some of them exhibit pieces of yellow and red marble.
With very few exceptions, the edges of the pyramids are directed towards the four quarters of the heavens. The proportion between the extension of the base and the height seems to have been strictly regulated ; the line from the base to the top is not always straight, being in some instances curved, in others broken by terraces of different heights ; the one near Sakkarah having six terraces of equal height. Some of them run to a point at the apex, while the tops of others are formed by platforms of different sizes. The dimensions of the pyramids are also equally various. According to the report of Girard, the pyramid of Cheops was 699 feet, 9 inches long at the base, and 425 feet, 9 inches high ; the pyramid of Chephrenes, 655 feet base, by 398 feet in height ; those of Sakkarah are a little smaller.


La parole à Hérodote
Herodotus informs us that it required the labor of 100,000 men during ten years to construct the embankment for the transportation of the stone blocks to the pyramid of Cheops, and afterwards the same number during twenty years to erect the pyramid itself. The latter operation was conducted by first building one terrace, and then raising all the materials for the next one, up to this ; the angles between the terraces being filled up, and the surface of the pyramid smoothed afterwards.


Construction de la Grande Pyramide
The construction of the large pyramid of Memphis is as follows : The first course of stones rests upon the main rock, and was imbedded in it to the depth of seven or eight inches. The rock was then cut so as to form a plinth, five feet high, which is 100 feet above high water of the Nile. Above the first course of stones are twenty others cut into steps 9½ inches wide to one foot rise. The two uppermost courses have been destroyed ; and the whole height, plinth and top included, is nearly 450 feet, the base being 716 feet in length. Each block is fitted into the adjoining one without the least irregularity, the lower stone receiving in a groove two inches deep, a projection of the upper one of the same size. The four angles of this pyramid point exactly to the four quarters of the globe, a thing not easily done even at the present day ; it establishes, however, one remarkable fact, viz. that during the thousands of years which have elapsed since the erection of this pyramid, the position of the axis of the earth has undergone no change whatever.


Intérieur de la Grande Pyramide
The entrance to the pyramid is at present on the north-eastern side, upon the 25th course, and about 45 feet above the base. (...) Having been closed with brickwork it was only accidentally discovered. A gallery sloping downwards, leads to a passage 3 feet, 5 inches in width and height, and 102 feet long, the entrance to which was blocked up by a large piece of granite which could not be removed, but a passage has been made around it. At the extreme end of this gallery is a platform, and on the right hand side a well cut in the rock, about 200 feet deep, but without water, even as low as 50 feet below the level of the Nile. Its extreme depth has, however, not been reached. At this floor a level passage branches off, about 118 feet in length, which leads first to a room called the queen's apartment, which is 17 feet 10 inches in length, by 16 feet, 1 inch wide, and empty ; second, to another gallery, 125 feet long, 25 feet high, and 6½ feet wide. On each side of this are benches 21 inches high by 19 inches wide, and at the end is another platform, communicating with another opening, 3 feet, 3 inches wide, 4 feet, 5 inches high, and 7 feet, 10 inches long, forming the entrance to the upper room of the king, which is 32 feet wide, 16 feet long, 18 feet high, and covered with polished granite, the southern side being the longest. At the western end is the granite sarcophagus, 7 feet, 1 inch long, 3 feet, 1 inch wide, 3 feet, 6 inches high. It is empty, and lies due north and south ; the lid is wanting. 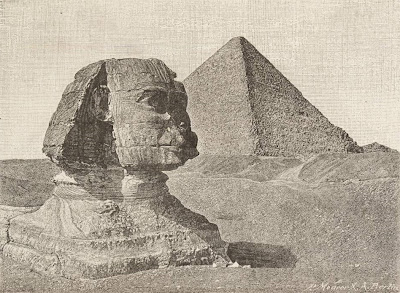 Illustration de 1884 (auteur inconnu)
Le Sphinx et les passages souterrains
Near this pyramid is situated a figure of the Sphinx. It is cut from the rock on which it stands, and is still connected with it. Its height to the back is about 40 feet, and it was necessary to remove masses of rock to lower the surrounding ground, in order to exhibit its full dimensions. The figure is 117 feet long ; the circumference of the head is 91 feet, the height from the belly to the top of the head 51 feet. There is an opening in the head in which the head-dress was fastened. The French, during the expedition to Egypt, after removing the surrounding sand by which it was covered up to the neck, discovered an opening between the fore legs of the figure, which soon proved to be a regular entrance, communicating by subterraneous passages cut through the rocks with the large pyramid. This accounts for there being no outer entrance to the pyramid, and for the different branches of the afore-mentioned galleries being secured by blocks of stone from the opposite side. At the same time also, it proves that the ancient Arabian authors were not mistaken in asserting that the different galleries and wells in the pyramid communicated with an entrance through an opening in the figure of the sphinx.


“La plus haute admiration”
From this short account of the remains of ancient Egyptian architecture an idea may be derived of the state of civilization of the nation which created it. Our highest admiration is due to the noble monuments of the talent, industry, and perseverance of a people, who maintained for hundreds and thousands of years an imposing style of architecture, uncorrupted and unchanged, and to whom the other nations are indebted for the transmission of the written alphabet, and for many valuable principles and ascertained facts in Geometry and Astronomy. It cannot be a matter of wonder that such a people should have spread its dominion over a vast territory, and have important colonies on the Euphrates, in Greece, and in other countries, and that its genius should have influenced the most talented and eminent men of ancient Greece.”
Publié par Marc Chartier à 06:00