“I have already observed that the Pyramids are monuments of the Old empire. Of the wonders of Egypt, none are by name better known, or by travellers more frequently visited, than the three largest of the Pyramids. Situated near Cairo - midway between the upper and the lower country - an excursion to the Pyramids is within the reach of hundreds who have no time to ascend the river and visit the temples which lie higher up. Yet, until very lately, an impenetrable mystery hung over these Pyramids. The age to which they belonged, the builders of them, the purpose for which they were built, were all misunderstood.
Ridiculous stories were current about them in the best-informed circles. They were built, it was said, with a view to astronomical observations ; as reservoirs for purifying the water of the Nile ; as granaries to store up the corn gathered by Joseph ; or to prevent the encroachments of the sand blowing over from the desert. This last was the suggestion of a learned French writer so late as the year 1845.
Then as to their age. Some conjectured them to be of antediluvian origin. Herodotus places them in the middle of the New empire. Pliny knew nothing about them, and asserted that no one knew anything about them. In 1832, a visitor of celebrity from India declared they were copies of some mythological structures at Benares, and that the sarcophagus in the Great Pyramid was not intended for the repose of a mummy, but to contain holy water. Such discordant opinions called loudly for further research, which was undertaken by Vyse and Lepsius. Within the last few years they have made the Pyramids a special object of their attention. They succeeded in discovering inscriptions within them which had escaped the notice of previous visitors ; and we now know beyond a doubt that the Pyramids are monuments of the earlier part of the Old empire ; that is to say, tombs of the kings and queens of Memphis.
It is no easy matter for a person who has not been in Egypt to realise the gigantic size of the Great Pyramid. It occurred to me to look out for a field of about thirteen statute acres, and as nearly square as possible. Standing in the middle of this field, I imagined a straight tree to be by my side forty-five feet in height. The poplars in the hedgerows in Cheshire do very well for the purpose. I then fancied ten such trees to be placed perpendicularly, one on the top of another, and got some idea where the point would be above my head to which the topmost would reach. Or perhaps the better plan would be to lay down aline of four hundred and sixty feet long, and, in imagination, rear it up like a ladder to the perpendicular. From that point then, as the apex of the pyramid, I carried my eye, sloping regularly downwards to the fences of the field on all the four sides, and conceived what the size would be of such an area when filled up with solid stonework. If the same mass were of bricks, there would be enough of them to build the city of Philadelphia; and the granite stone which laces this pyramid would face all the public buildings in Vienna or Berlin, the weight being nearly seven millions of tons. So gigantic are the proportions of the Great Pyramid.

“La taille de la pyramide était nécessairement proportionnée à la durée du règne du roi”
The ascent to the top is fatiguing, though by no means difficult ; and from the top there is of course a magnificent view in every direction. It formed, however, no part of the design of the builder to provide for the enjoyment of fine scenery, for at the time these pyramids were built he had made it quite impossible for anybody to get up at all. So ingenious is the process of construction, that I must give a description of it, taken from Gliddon's (*) Lectures on Egypt.
When a king began his reign, one of the first things he did was to level the surface of the rock for the base of the pyramid which was to cover his tomb, and excavate a chamber underground for the reception of the body, with a passage communicating with the surface. That being done, he built a course of masonry over it, corresponding in size with the excavation. If the king died during the year, a small pyramid was thus formed ; if he continued to live a second, a second course was added, and so on for every future year, from which it is evident that the size of the pyramid was necessarily proportioned to the length of the king's reign. On his death a finish was put to the work by filling up the angles of the masonry with smaller stones, and then placing oblong blocks one upon another, so as to form steps from the base to the apex ; after which, beginning at the top and working downwards, these stones were bevelled off at the corners, so as to give the pyramid a smooth surface, and leave it a perfect triangle.
It was a misconception of this process which occasioned a laugh at Herodotus for saying the Pyramids were finished from the top downwards, but this was actually the case. Nothing can exceed the beauty of the masonry, for by this skillful contrivance each stone of the casing capped the next so as to leave no vertical joints, thus combining yearly increase without alteration in form, and perfect durability when completed.
I observed that the interior of the Great Pyramid is one solid mass of masonry. This is not, however, exactly the case. There are within it a hall, two chambers - called the king's and the queen's chamber -, a hole, supposed to have been a well, and two air passages, to give ventilation ; but these do not form together one-sixteen-hundredth part of the entire area, the rest being perfectly solid.
The second Pyramid appears a little taller than the Great Pyramid, being built on higher ground. It covers rather more than eleven acres.
The third Pyramid is the smallest of the three, but the most beautiful, being composed of larger stones than the others. It was opened in 1837 by General Vyse, who was disappointed to find that the Arabs had anticipated him. There was the broken cover of the king's coffin (with, as it was supposed, a part of the body), the hieroglyphical inscription on which is a striking evidence of the belief of the Egyptians in the resurrection. Vyse describes thirty-five or thirty-six pyramids besides the above, and Lepsius has since discovered thirty more, four being built of sunburnt brick, and the rest of stone.
Herodotus says that Cheops built the Great Pyramid, his brother Chephren the second, and Mycerinus the third ; names, which (making allowance for the difference in the spelling) agree very well with the shields and inscriptions found within the buildings. But we know now what Herodotus did not know, that these kings belong to the fourth dynasty of the Old empire, and that they reigned ages before and not after the era of the great Sesostris. 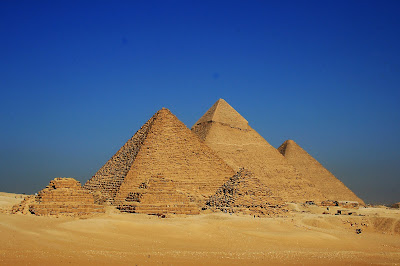 Cliché de Simon Cog (avec l'aimable autorisation de l'auteur)
Par couches successives
The united reigns of Cheops and Chephren lasted one hundred and six years. During this unhappy period, the Egyptians were exhausted by the labour bestowed on these gigantic works, and on the causeways over which the stones for their construction were dragged from the mountains, and which are still in existence. Every successive coat or skin which a pyramid received, by laying on additional layers of stone, entailed upon the workmen a vast yearly increase of toil, especially in an age when mechanical inventions were rude and clumsy. It is, indeed, impossible to conceive how, with the aid only of such simple contrivances, the last layers of the great Pyramids were got on at all. How ardently must the people have longed for the death of the king, every year of whose life added to their sufferings in a geometrical ratio ! Had Cheops reigned much longer than he did, the rocks of Egypt might have been insufficient for his sepulchre. And indeed as it was, the patience of this most patient of people broke down. There is a tradition that the body of one of these kings was not permitted to enter the pyramid that had been constructed for it. It was torn in pieces by the Egyptians. And the whole period of one hundred and six years was ever after regarded by them with detestation ; all the greater because it appears to have been the only period of their annals during which they were ruled over by tyrannical sovereigns.”
(*) sur cet auteur, lire la note de Pyramidales : ICI