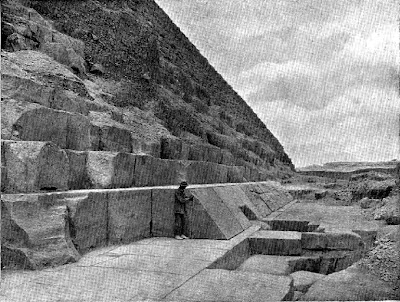 "Mr. L. Dow Covington, an American, has been working at the Great Pyramid for the past eight years, off and on. When I came here a week ago, he was just completing some excavating work at the foot of the north side of the Great Pyramid, and you can appreciate my pleasant surprise when I beheld not only the three historical casing-stones discovered many years ago by Col. Howard Vyse, and now again brought to the light of day, but sixteen others, all of them in one continuous row. These stones demonstrate the fact that the Great Pyramid was formerly covered or cased with beautiful smooth casing-stones, a fact which formerly some had been inclined to doubt." 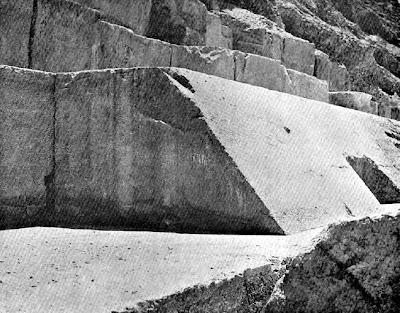 "The first three or four of these stones are immediately under the Entrance of the Pyramid, and are still in excellent preservation, though I notice that the small portion referred to by Colonel Howard Vyse as adhering with such tenacity, has disappeared. The others to the west of these show more or less signs of surface wear, especially the last five to the extreme west which are much broken." 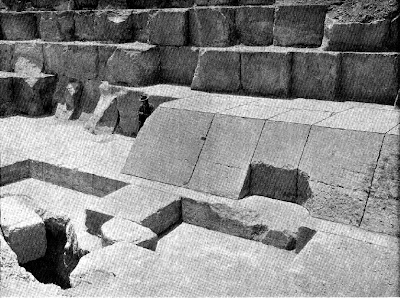 "In one of the photographs, which shows a front and partly top view of the best preserved of the casing-stones, with Mr. Covington standing at the east end looking along the upper surface of the row, a large open fissure in the rock can be seen in the foreground.
According to the account of Col. Howard Vyse, this fissure had originally been filled in with rubble stone-work, and covered over with large inset stones, one of which may be seen in the photograph, partly fallen in. Over these inset stones which were flush with the levelled rock, the beautifully fitted pavement had been laid. It had been Col. Howard Vyse's intention to have blasted the rock to a considerable depth at this part in hope that he might discover a subterranean communication with a secret tomb-chamber under the Pyramid, supposed to have been alluded to by the Greek historian, Herodotus. He chose this part because it is in line with the Entrance Passage of the Pyramid, but the discovery of the fissure saved him considerable trouble and expense. He caused it to be cleared to a depth of 47 feet, and to a length of 74 feet from east to west, but without discovering a passage. He was therefore satisfied that there was no subterranean passage in connection with the Great Pyramid, save that of the Well-known Descending Passage leading down to the Pit, a hundred feet below the base of the Pyramid." 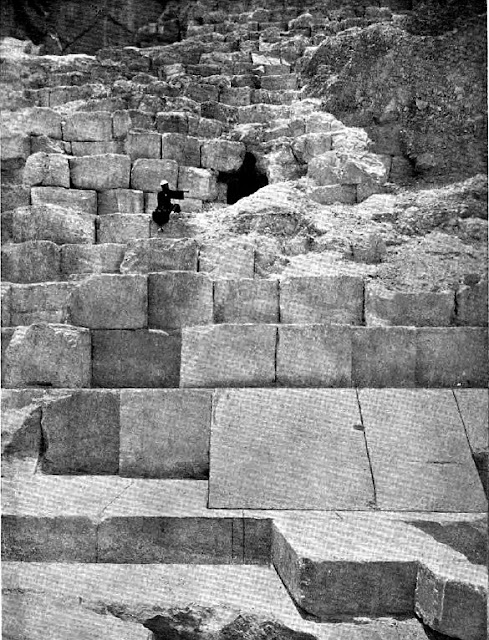 "In a second view of the casing-stones of the Great Pyramid, taken with my camera erected a little more to the east, Hadji Ali Gabri is seen sitting some distance up the side of the Pyramid, pointing to the entrance of Al-Mamoun's forced passage, which is situated in the seventh course of the Pyramid's horizontal core masonry. In the upper part of the section shown in this photograph, part of the great angular limestone blocks above the mouth of the Entrance Passage, may be seen." 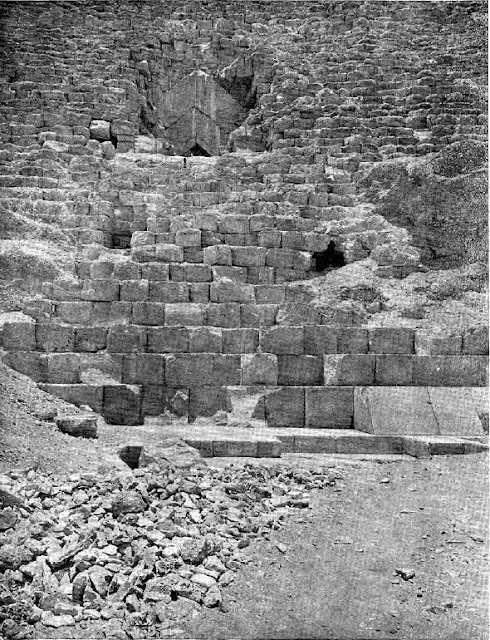 "The relative positions of the casing-stones, Al-Mamoun's forced passage, and the Entrance to the Pyramid can better be judged, however, by [this] view which I took with the camera erected at a greater distance from the base of the Pyramid. But the square mouth of the Entrance, which lies some distance in from the face of the Pyramid, cannot be seen from the ground below ; also the angular blocks above the Entrance appear much lower down than they are in reality.This (...) photograph shows the ruinous and dilapidated condition to which this great monument has been reduced by the ruthless hands of the spoiler.
According to historical evidence, beautiful smooth limestone blocks, similar to those at the north base, encased the entire Pyramid up till 820 A.D., when Caliph Al-Mamoun, in his greed to gain possession of supposed hidden treasure, forced his way into the Pyramid's interior. This was the beginning of the destructive work ; and in the years that followed, the Pyramid's casing was tom off piecemeal for building purposes." 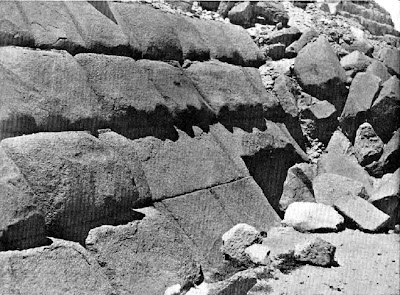 "I photographed the square Entrance of the Third Pyramid, together with two or three courses of the granite casing-stones which are still in situ alongside. Except at their joint edges, where narrow strips of the surface have been chiselled even and smooth, the outer faces of these stones have not been dressed down, but have been left very rough and projecting." 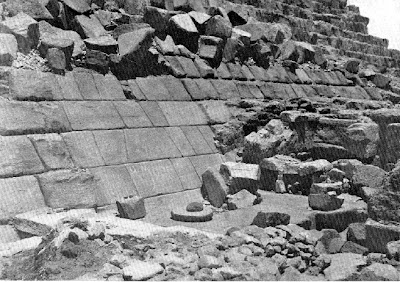 "Another photograph of this pyramid at the part immediately connected with its temple on the east side, shows a large area of the granite casing-stones dressed down to one flat surface, but, adjoining these dressed stones, a few are to be seen still rough, and others only partially dressed. In this photograph a portion of the granite pavement of the temple may also be seen.
Although many of these stones are large, none approaches in size to the casing-stones of the Great Pyramid ; nor do they present so beautiful an appearance. All round the Second and Third Pyramids great numbers of granite casing-stones lie partly buried in the large mounds of debris." 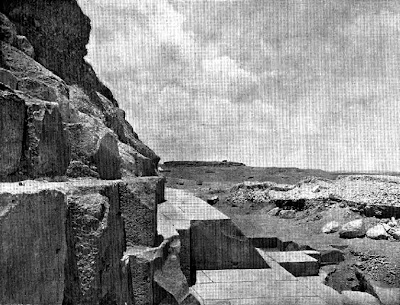 "This morning at seven o'clock, Mr. Covington and I measured the casing-stones at the north front of the Great Pyramid. Captain Norton, a friend of Mr. Covington, is making a sketch of these stones, and our measurements may be of service to him. We found that while they are of a uniform height, they vary greatly in both width from east to west, and in depth inward toward the core masonry at the back. The first stone to the east of the long row of casing-stones is by far the largest. It measures about 4 feet 11 inches high, and is 6 feet 9 inches wide from east to west. In depth it measures 8 feet 3 inches along the base line to the core masonry. This is only the apparent depth, however, for it extends inward for still another two feet beyond the core block to the east of it, and thus the actual base measurement from front to back is 10 feet 3 inches. The cubical contents of the block is about 200 cubic feet ; and its weight is approximately 19 tons. This weight is three tons more than Professor Flinders Petrie estimated ; he evidently was not aware that the stone extends beyond the core block to the east of it, the debris, now cleared away by Mr. Covington, having no doubt concealed the upper joint-lines. This extra depth can be seen very well in [this] photograph which I took with my camera erected on top of the first course of the core masonry, some distance to the east of the casing-stones." 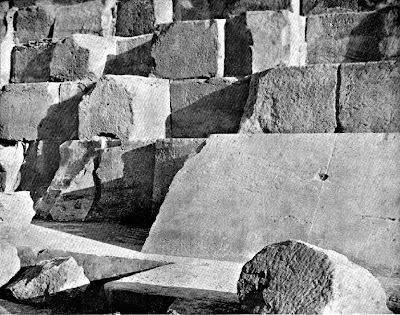 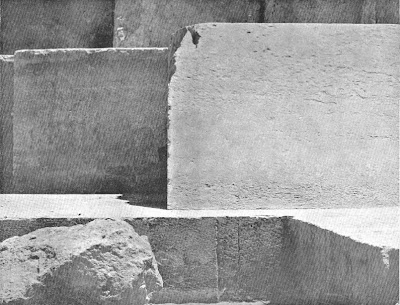 "The casing-stones are simply wonderful. Morton says that when he arrived here, Mr. Covington was just completing his work of excavating them ; and he managed to secure a photograph showing Mr. Covington's black workmen removing the last few large encumbering stones. In [these two] photographs which Morton took with the camera erected very close to the largest of the casing-stones, these debris stones may be seen lying in front." 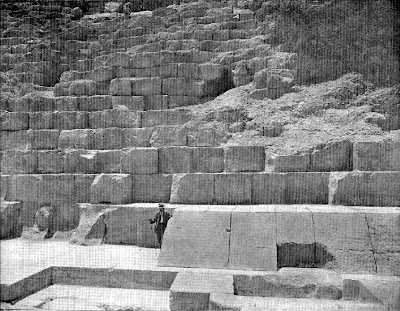 "Among other photographs, Morton secured a very good one showing Mr. Covington standing at the east end of the long row of casing-stones, and high up in front of the Entrance another man standing on the fourteenth course of masonry. This photograph, owing to Mr. Covington and the other man standing so far apart one above the other, is good for conveying some idea of the true perspective, for it is very difficult to realize the relative distances of the various parts, and the dimensions of the masonry courses, without some such aid. But however good photographs may be, they can never fully convey to the mind the proper sense of proportion, and the true beauty, which an actual visit to the place must do. You would require to be here to see how beautifully-finished and close-fitting the casing-stones are." 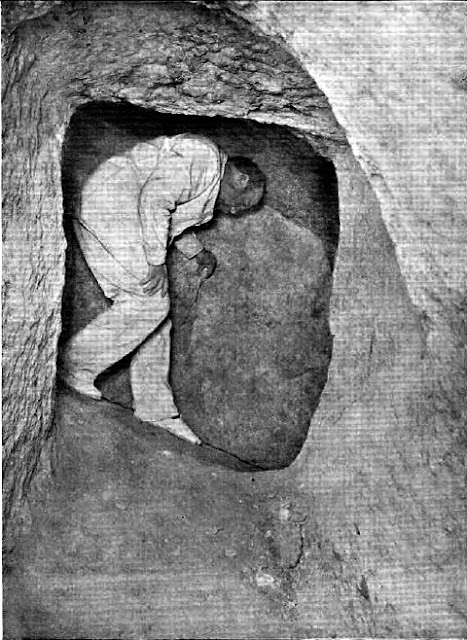 "The awkward stooping posture which it is necessary for one to assume when proceeding down the uneasy slope of the Descending Passage, is well illustrated in a photograph which was taken with the camera erected at the bottom of the Well-shaft, and pointing out eastward through the little passage, in the direction of the Descending Passage. It shows John walking down the steep floor, with his head just touching the low roof. John says he wasglad when the exposure was completed, as he felt very much like the "poor groaning creation " while posing for the picture." 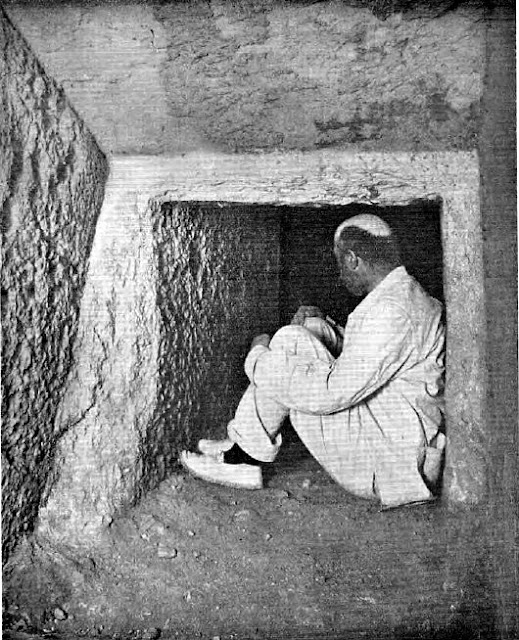 "We took a photograph showing the square flat end of the Descending Passage ; and, in order to make apparent the very small bore of the Small Horizontal Passage leading southward from it to the Subterranean Chamber, John sat in its entrance, his back resting against the west wall."