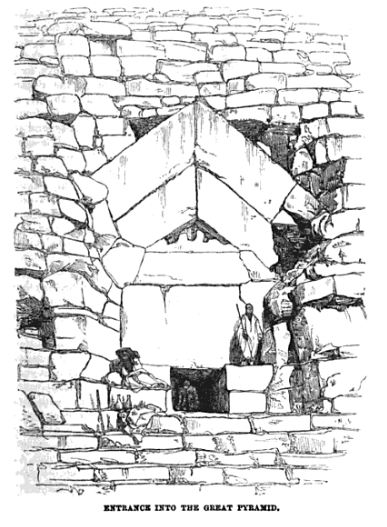 The different groups of Pyramids are, without exception, built at the embouchures of the various gorges breaking the continuity of the Libyan chain. The Pyramids, constituting the individual groups, are so disposed with respect to each other as to form, as nearly as possible, walls across the valleys at whose termination they were built. They are placed en echelon. The Pyramids themselves are oriented, not with their corners uniformly in the direction of the four cardinal points of the compass, as we have always been taught, but with their sides fronting the ravines, at whose embouchures they were constructed.
The pyramidal shape combined the chief elements of durability. Presenting four inclined triangles, they exhibited in this particular the triangular form of the Yoni, a sacred figure, worshiped by the ancient Egyptians as well as Asiatics, as symbolical of deity. A religious idea was doubtless associated with the erection of the Pyramids for the purpose of acting upon the common mind of the Egyptians.
The sands of Sahel had advanced to the very waters of the Nile. Typhon had triumphed, and " the body of Osiris was broken into a thousand pieces." It was proposed by the college of priests to build magnificent and imperishable monuments to the fallen god of Egypt. Moved by this tender and pious idea, the myriads of Egypt tailed patiently for years in the erection of the Pyramids, while at the same time their labors were so directed by the priests, and learned men, who alone understood the secret purpose of these mighty structures, as to secure a great national benefit.

The Pyramids appear to have answered in part the purpose for which they were doubtless built. I found the sand but a few feet deep at the base of Cheops, and saw peasants cultivating the valley of the Nile scarcely half a mile from the group of Ghizeh. The Bedouin and the Fellah point to the silent and mysterious Sphinx as a talisman to prevent the advance of the desert ; but, in the estimation of science, the Pyramids themselves are the monuments whose talismanic influence has protected the domain of Osiris from the fury of Typhon.
This is the theory of M. de Persigny, and has been adopted by several French savans, among others by M. Huot, the illustrious successor of Malte Brun.
Having completed our examination of the Great Pyramid, we repaired to the base of the Pyramid of Cephrenes. The latter appears taller than the former, in consequence of its being built upon higher ground. It is smaller, however, covering but little more than eleven acres of ground, and was opened by Belzoni in 1816. The granite casing has been removed from the lower part. That of the upper part, consisting of calcareous stone, still remains, and renders the ascent to the apex exceedingly difficult. The Arabs, however, offered to make the attempt for a few piasters. The hieroglyphics found within prove this to be older than the Great Pyramid.

A little further south stands the third Pyramid, vastly inferior in size to the giants of Cheops and Cephrenes, but surpassing them in beauty and in the magnitude of the stones of which it is composed. Part of the red granite casing with which it was revetted has also been removed. This desecration of the Pyramids was the work of the Saracenic Caliphs in their search for hidden treasures, or in order to furnish building materials for the mosques and walls of Cairo. According to the Arabic accounts, Othman Ben Youssuf determined to demolish the third Pyramid, but found that the wealth of the whole kingdom would not afford him the means of accomplishing his design. One of the later caliphs wished to blow up the Great Pyramid by filling the well with powder, but gave up the idea on being told that the explosion would cause the destruction of Grand Cairo, though the latter is twelve miles from the Pyramids.
Publié par Marc Chartier à 07:57