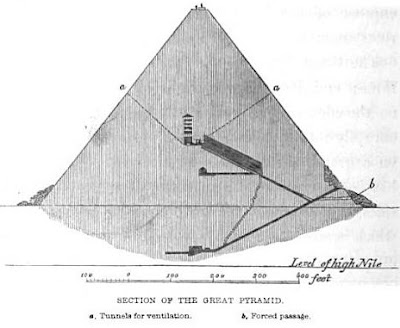 “If the pyramids attest the resolution of the founders, they reflect little honour upon the Egyptian nation. One can scarcely view these buildings, indeed, without the conviction that they are the work of an enslaved and driven race. Such vast piles of mere stone and mortar would never have been reared at Athens or at Rome. What would not Pericles have done with the same means ? At the Parthenon, at St. Peter's, at York Minster, you view the result of the labours of a multitude of ingenious and thinking men, each contributing the skill derived from a life devoted to his art. But in the erection of the pyramids little else was required of the artificers than physical exertion and obedience to the taskmaster. Whatever the immediate purpose of these monuments, doubtless they had their real origin in those aspirations after immortality which are common to mankind in every age ; but the sentiment appeared under a loftier character in Greece, that cradle of all that was most refined and glorious in Pagan antiquity. (...)
Such reflections are natural on the first view of the pyramids, especially if you come fresh from the masterpieces of Athenian art. Looking up to these mountains of masonry you are ready to say scornfully with Pliny, Regum pecuniae otiosa ac stulta ostentatio. But it must be confessed a longer acquaintance obliges you somewhat to modify this opinion. These creations of Cheops and his successors exhibit a sublime simplicity of conception and a dauntless hardihood of enterprise which, when fully appreciated, take possession of the soul. It is with the pyramids as with St. Peter's and other great works, every successive visit you wonder and admire more. (...)
The Great Pyramid was the first erected of the three ; and its site was admirably chosen. Rising on the edge of the rocky platform which here sinks abruptly into the plain, the mighty pile appears based on a grand terrace. The original inclined exterior has been carried off, large excavations made in the sides, and several courses removed from the summit, which is now a platform about 33 feet square. This dilapidation is attributed to the great Saladin and his successors, who required stone for their new capital on the opposite bank of the river, and found it here ready quarried to their hand. Memphis, nearer the river and therefore more available, has been entirely demolished; and the Pyramids probably escaped the same fate only because their indestructible masses defied all attacks. (...)

La Grande Galerie est la particularité la plus remarquable à l’intérieur
The Gallery leading up to the King's Chamber is the most remarkable feature of the interior. The
other passages are scarcely four feet high, this is twenty-eight. Its width too is nearly double that of the others ; but this is gradually diminished towards the ceiling by a series of projections, probably to diminish the span of the roof, which has to bear an immense load. Along each side runs a solid projection or bench having holes at intervals on the top. These were perhaps to secure a platform, which, resting on the stone benches, would have formed a raised floor to the passage. If mythological or funereal rites were ever celebrated within the pyramid, here doubtless would have been the grand display. (1) (...)

La pente des couloirs de la Grande Pyramide est plus liée à une nécessité de la construction qu’à une utilisation astronomique
Much has been said of late upon the correspondence in the slope of the various passages in the pyramids. As all their entries were declared to go downward from the Northern front, at an angle of about 27°, some have imagined that these passages were used as astronomical tubes ; that the priests, stationing themselves at the lower end, thence watched the transit of the polar or some other star over the mouth. This hypothesis is more ingenious than satisfactory. It must have been deemed far-fetched if the pole-star could have been seen from this position, but it could not. The explanation too is applicable only to such passages as open upon the exterior: why do those within follow the same inclination ? The correspondence may, I think, be much more satisfactorily referred to the necessities of construction. That stability of structure was carefully studied by the architects is manifest from their costly contrivances for discharging great perpendicular pressures, as well as in other particulars. Now it may be shown that if it were required to carry an inclined passage through a solid mass of masonry like one of these pyramids, so as to impair its stability as little as possible, it must take the very slope given. (2)
The ceilings of these sloping passages seem generally formed of stones laid parallel to the floors : but it is clear that a roof of this sort, lying upon a steeply inclined bed, would be very ill adapted to support a weight of many thousand tons, especially when its downward course was intercepted by another passage. 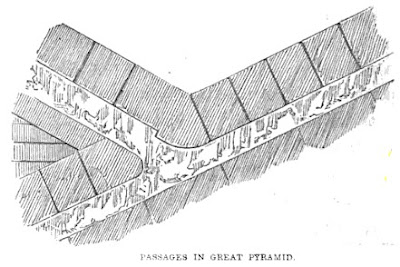 Passages dans la Grande Pyramide
It seems therefore highly probable that these are merely ceilings, and that more efficient roofs, concealed above, really sustain the superincumbent masonry. This is not mere conjecture. What may be the commencement of such a roof is actually seen at the mouth of the entrance passage, where the construction is laid open. Here two couples of inclined blocks, introduced above the ceiling stone, throw off the weight upon the lateral masonry.
Whether these discharging stones are continued along the passage as an upper roof could only be determined by a dissection of the interior ; but as the superincumbent load increases as we advance into the building it is not likely that a weaker construction should have been provided to sustain it.
Another fact confirms the supposition that massive roofs exist above the ceilings. There are two funnels for the ventilation of the interior of the pyramid. Of these, the northern, instead of running up to the exterior in a direct line like the southern, bends off to the left. No explanation of this has been proposed. If we imagine an inner ridged roof to exist above the ceiling of the gallery, the irregularity is at once intelligible ; the air-channel was turned off that it might not interfere with this roof. 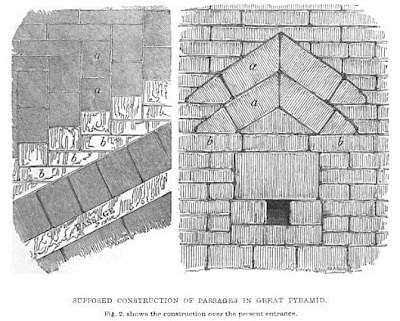 La construction supposée des passages dans la Grande Pyramide
These concealed roofs are probably of a construction like that over the entrance of the Pyramid and above the uppermost chamber, under the apex.If so, the discharging stones a, a, would require for their abutments a regular series of broad steps, b, b. Such a series would be best obtained by making the slope of the passage that of a line drawn from the edge of the top to the middle of the bottom of the several blocks ; and this would be an inclination of about 27°, or that actually given.

Une particularité de la seconde pyramide : elle a deux entrées
The Second Pyramid stands about two hundred yards S. W. of that of Cheops. Having retained the upper part of its casing and lost little from its apex it rises nearly to the same height as the greater one. The internal arrangement of the two structures is similar. In both the entrance is on the north side and a little east of the centre ; in both the passages are low narrow adits, horizontal, or inclined at an angle of about 26° or 27°. In both there seem to have been two chief apartments ; one, having a sarcophagus at its western end, under the apex ; the other, or secondary chamber below. In the Second Pyramid however the latter is not central, but in the north-west quarter, beneath the base line. But the most remarkable difference is that Cephren's building has two entrance passages, one descending from a point about 50 feet above the ground, the other from the base. Both had been stopped up at the bottom with a granite portcullis. The upper passage conducts to the chief apartment. The lower leads to the second chamber, and by an ascent joins that above. All the chambers in this pyramid are hewn in the rock ; the builders thus avoided the difficulty, experienced by their predecessors, of constructing a roof strong enough to bear the prodigious load of masonry between it and the apex. (...)

Les architectes de la troisième pyramide ont profité des erreurs de leurs devanciers
The Third Pyramid or that of Mycerinus was opened by Col. Vyse in 1837. Its internal arrangement differs somewhat from the two larger ones. Except the first twenty-eight feet of the entry, all the chambers and passages are hewn in the rock beneath the building, so that the pyramid may be called a solid mass. It seems to have been constructed in steps or stages, and the sides afterwards filled in with masonry of a different sort. The lower part of the exterior was of granite. (...)
The Second and Third Pyramids stand upon an inclined plane. In building the Second, in order to obtain a level base for the exterior they cut away the higher part of the rock, and thus formed a broad deep fosse round two sides of the building, which of course detracts from its effect. The architects of Mycerinus seem to have profited by the error of their predecessors. Instead of sinking their structure into a pit they raised the lower part by a substruction of gigantic stones, which promises to last as long as the native rock. This probably once formed a kind of terrace before the front.”

(1) The fact that the passages were carefully stopped up seems opposed to the notion that the pyramids were ever used for such purposes. Yet if we regard them merely as tombs it is difficult to account for the introduction of ascending and descending passages, which much increased the difficulties of construction. Perhaps the stopping up was some time subsequent to the interment.
(2) Any irregularity or defect caused by the introduction of these passages would be carried through a considerable part of the building.
Publié par Marc Chartier à 06:00