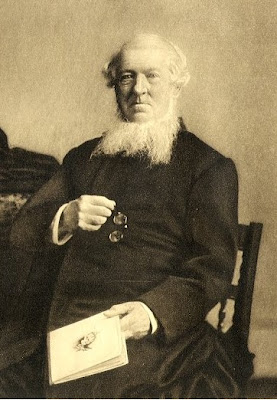 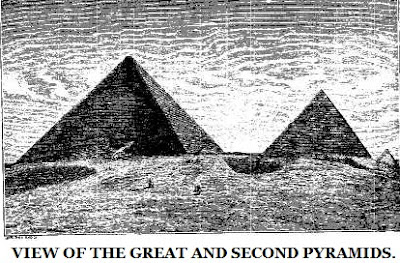 “The Egyptian idea of a pyramid was that of a structure on a square base, with four inclining sides, each one of which should be an equilateral triangle, all meeting in a point at the top. The structure might be solid, and in that case might be either of hewn stone throughout, or consist of a mass of rubble merely held together by an external casing of stone ; or it might contain chambers and passages, in which case the employment of rubble was scarcely possible. It has been demonstrated by actual excavation, that all the great pyramids of Egypt were of the latter character that they were built for the express purpose of containing chambers and passages, and of preserving those chambers and passages intact. They required, therefore, to be, and in most cases are, of a good construction throughout.
There are from sixty to seventy pyramids in Egypt, chiefly in the neighbourhood of Memphis. Some of them are nearly perfect, some more or less in ruins, but most of them still preserving their ancient shape, when seen from afar. Two of them greatly exceed all the others in their dimensions, and are appropriately designated as "the Great Pyramid" and "the Second Pyramid." A third in their immediate vicinity is of very inferior size, and scarcely deserves the pre-eminence which has been conceded to it by the designation of "the Third Pyramid." (...)
The "Pyramid Builders", or kings who constructed the three monuments (...), were, according to a unanimous tradition, three consecutive monarchs, whose native names are read as Khufu, Shafra, and Menkaura. These kings belonged to Manetho's fourth dynasty; and Khufu, the first of the three, seems to have been the immediate successor of Snefru.

Dans quel but les pyramides ont-elles été construites ?
Theorists have delighted to indulge in speculations as to the objects which the builders had in view when they raised such magnificent constructions. One holds that the Great Pyramid, at any rate, was built to embody cosmic discoveries, as the exact length of the earth's diameter and circumference, the length of an arc of the meridian, and the true unit of measure. Another believes the great work of Khufu to have been an observatory, and the ventilating passages to have been designed for "telescopes", through which observations were to be made upon the sun and stars; but it has not yet been shown that there is any valid foundation for these fancies, which have been spun with much art out of the delicate fabric of their propounders' brains. The one hard fact which rests upon abundant evidence is this : the pyramids were built for tombs, to contain the mummies of deceased Egyptians. The chambers in their interiors, at the time of their discovery, held within them sarcophagi, and in one instance the sarcophagus had within it a coffin. The coffin had an inscription upon it, which showed that it had once contained the body of a king. If anything more is necessary, we may add that every pyramid in Egypt - and there are, as he have said, more than sixty of them - was built for the same purpose, and that they all occupy sites in the great necropolis, or burial-ground opposite Memphis, where the inhabitants are known to have laid their dead.

Sauf pour la troisième pyramide, l’architecte a conçu toute la structure depuis le début
The marvel is, how Khufu came suddenly to have so magnificent a thought as that of constructing an edifice double the height of any previously existing, covering five times the area, and containing ten times the mass. Architecture does not generally proceed by "leaps and bounds" ; but here was a case of a sudden extraordinary advance, such as we shall find it difficult to parallel elsewhere.
An attempt has been made to solve the mystery by the supposition that all pyramids were gradual accretions, and that their size marks simply the length of a king's reign, each monarch making his sepulchral chamber, with a small pyramid above it, in his first year, and as his reign went on, adding each year an outer coating; so that the number of these coatings tells the length of his reign, as the age of a tree is known from the number of its annual rings.
In this case there would have been nothing ideally great in the conception of Khufu - he would simply have happened to erect the biggest pyramid because he happened to have the longest reign ; but, except in the case of the "Third Pyramid", there is a unity of design in the structures which implies that the architect had conceived the whole structure in his mind from the first. The lengths of the several parts are proportioned one to another. In the "Great Pyramid", the main chamber would not have needed the five relieving chambers above it unless it was known that it would have to be pressed down by a superincumbent mass, such as actually lies upon it. Moreover, how is it possible to conceive that in the later years of a decrepid monarch, the whole of an enormous pyramid could be coated over with huge blocks - and the blocks are largest at the external surface - the work requiring to be pushed each year with more vigour, as becoming each year greater and more difficult ? Again, what shall we say of the external finish ? Each pyramid was finally smoothed down to a uniform sloping surface. This alone must have been a work of years. Did a pyramid builder leave it to his successor to finish his pyramid ? It is at least doubtful whether any pyramid at all would ever have been finished had he done so.


L’ambition, l’égoïsme et l’orgueil de Khoufou
We must hold, therefore, that Khufu did suddenly conceive a design without a parallel - did require his architect to construct him a tomb, which should put to shame all previous monuments, and should with difficulty be surpassed, or even equalled. He must have possessed much elevation of thought, and an intense ambition, together with inordinate selfishness, an overweening pride, and entire callousness to the sufferings of others, before he could have approved the plan which his master-builder set before him. That plan, including the employment of huge blocks of stone, their conveyance to the top of a hill a hundred feet high, and their emplacement, in some cases, at a further elevation of above 450 feet, involved, under the circumstances of the time, such an amount of human suffering, that no king who had any regard for the happiness of his subjects could have consented to it. Khufu must have forced his subjects to labour for a long term of years - twenty, according to Herodotus - at a servile work which was wholly unproductive, and was carried on amid their sighs and groans for no object but his own glorification, and the supposed safe custody of his remains. Shafra must have done nearly the same. Hence an evil repute attached to the pyramid builders, whose names were handed down to posterity as those of evil-minded and impious kings, who neglected the service of the gods to gratify their own vanity, and, so long as they could exalt themselves, did not care how much they oppressed their people. There was not even the poor apology for their conduct that their oppression fell on slaves, or foreigners, or prisoners of war. Egypt was not yet a conquering power ; prisoners of war were few, slaves not very common. The labourers whom the pyramid builders employed were their own free subjects whom they impressed into the heavy service. (...)
Still, whatever gloomy associations attach to the pyramids in respect of the sufferings caused by their erection, as monuments they must always challenge a certain amount of admiration. A great authority declares : "No one can possibly examine the interior of the Great Pyramid without being struck with astonishment at the wonderful mechanical skill displayed in its construction. The immense blocks of granite brought from Syene, a distance of five hundred miles, polished like glass, and so fitted that the joints can scarcely be detected ! Nothing can be more wonderful than the extraordinary amount of knowledge displayed in the construction of the discharging chambers over the roof of the principal apartment, in the alignment of the sloping galleries, in the provision of the ventilating shafts, and in all the wonderful contrivances of the structure. All these, too, are carried out with such precision that, notwithstanding the immense superincumbent weight, no settlement in any part can be detected to an appreciable fraction of an inch. Nothing more perfect mechanically has ever been erected since that time." (1)


Excellence architecturale
The architectural effect of the two greatest of the pyramids is certainly magnificent. They do not greatly impress the beholder at first sight, for a pyramid, by the very law of its formation, never looks as large as it is - it slopes away from the eye in every direction, and eludes rather than courts observation. But as the spectator gazes, as he prolongs his examination and inspection, the pyramids gain upon him, their impressiveness increases. By the vastness of their mass, by the impression of solidity and durability which they produce, partly also, perhaps, by the symmetry and harmony of their lines and their perfect simplicity and freedom from ornament, they convey to the beholder a sense of grandeur and majesty, they produce within him a feeling of astonishment and awe, such as is scarcely caused by any other of the erections of man. (...)
Moderns have doubted whether they could really be the work of human hands. If they possess only one of the elements of architectural excellence, they possess that element to so great an extent that in respect of it they are unsurpassed, and probably unsurpassable.
These remarks apply especially to the first and second pyramids. The "Third" is not a work of any very extraordinary grandeur. The bulk is not greater than that of the chief pyramid of Saccarah, which has never attracted much attention; and the height did not greatly exceed that of the chief Mexican temple-mound. Moreover, the stones of which the pyramid was composed are not excessively massive. The monument aimed at being beautiful rather than grand. It was coated for half its height with blocks of pink granite from Syene, bevelled at the edges, which remain still in place on two sides of the structure. The entrance to it, on the north side, was conspicuous, and seems to have had a metal ornamentation let into the stone. The sepulchral chamber was beautifully lined and roofed, and the sarcophagus was exquisitively carved. Menkaura, the constructor, was not regarded as a tyrant, or an oppressor, but as a mild and religious monarch, whom the gods ill-used by giving him too short a reign.”