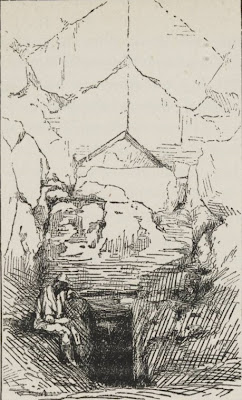 “It is only after repeated inspection that an adequate idea is obtained of the so-called Pyramid-field. Familiarity brings the most wonderful sights into their proper perspective. After a third or fourth visit, the bigness of the Pyramid of Shoofoo no longer weighs upon the mind, the height of the Pyramid of Chafra no longer overshadows it; the whole platform begins to assume its true aspect. (...)
The traveller who comes to Egypt with a preformed theory about the Great Pyramid and its purpose, and who canters out from Cairo on a glaring day, is dragged up to the top, hustled through passages of the diameter of a gas-pipe, alternately exposed to the brightest sunshine and the blackest darkness, who is next hurried down across the hot sand to stare at the Sphinx, and finally chased through the dust by a yelling donkey-boy the long seven miles back to Cairo, supposes he has thoroughly “done” the whole thing. He fondly imagines that in all his after-life he will be an authority on Pyramids, and will be capable, in the home circle, if not in a wider sphere, of giving a valuable opinion on the theory of Mr. Taylor and Mr. Smyth. One need not be surprised if he pronounces strongly in its favour. The performance he has gone through is calculated alike to fatigue his body and confuse his mind. His attention has been wholly concentrated on the Great Pyramid. Its height, its rugged stones, the vociferations of the Arab guides, the giddiness which the steep slope or the sun's rays induced when he was on the summit, the broken shin acquired in the exploration of the interior, the temporary blindness after he came out, the grand chorus of backsheesh which signalised his departure, and a thousand other impressions equally vivid, mingle admirably with the ignorance or prejudice he brought out, and conduce to the formation of what he boasts is a cool and unwarped opinion.
He has certainly seen something, superficially, of one Pyramid ; but what did he see of the nine or ten which are near it, of the fifty-nine which are further off ? He has not read, supposing he could read, a single hieroglyph. He has not the vaguest knowledge of early Egyptian history. He is perfectly certain that the world was created B C. 4004, and believes that the odd four years were part of the original revelation. He has probably never heard of Lepsius, certainly never of Lieblein. He is not acquainted with the name of a single Pyramid, and has no more knowledge of the table of Sakkara, or the table of Abydos, than of the Turin papyrus. He considers it best to keep his mind free and unfettered, and is all the more positive as to what he imagines he does know.
The man who, after a personal visit to the cemetery of Gheezeh, can continue in the nurture and admonition of those who believe in the Sacred Cubit, the Time-passage theory, the Meteorological theory, or any other tenet of the sect of which Mr. Smyth is presumably the prophet, must have been convinced on evidence very different from the evidence of the senses. I should be sorry to disturb a faith which is so wholly ethereal that it is independent of facts, and whose votaries are as much beyond the influence of argument as of plain proof. (...)
Historically speaking, the Pyramids, apart from their antiquity, are of the highest interest. They represent a time of profound peace. They point to the existence of a dominant race, and of a population which could be called on for unlimited labour. They tell us little of the finer arts, in sculpture and painting, which even then flourished, but much of skill in engineering, quarrying, building, as distinguished from architecture, and all that could be done by mere multitudes working together and bringing brute force to bear on stubborn materials. Whatever of higher art those early kings lavished on their “fair resting-places,” whatever of portraiture and painting, of gold and jewels, of carving and ornament, of epitaphs and funeral odes they could command, were bestowed on the temple ; the tomb itself was vast, solid, enduring, nor is it at all certain that the actual burial-place of Shoofoo or Chafra has been reached and rifled. (...) 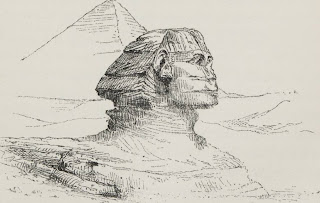 In the aftertime, when the kings of the twelfth dynasty fought against the northern strangers, when Aahmes led his people against the Shepherds, when Seti I. subdued the Hittites and his grandson pursued Israel, when fortresses and treasure cities, Pi-Tum and Rameses, had to be built on the border, we no longer hear of such great cairns as the Pyramids. The tombs in the Valley of the Kings at Thebes, great as they are, required rather skilled labour than mere force. No vast multitude was needed to decorate them in beaten gold and glorious red. The peaceful artist and his staff worked quietly in the dark corridors, while the people whose ancestors had heaped up the tombs of the older Pharaohs, now followed the later Pharaohs to the battle-field.
A smaller waste of human life than that by which Bonaparte ruined France would have built him a pyramid greater than Shoofoo's. About half the sum lavished by Ismail Pasha on plastered palaces would have made him a monument more enduring than Chafra's. But the Pyramid-builders had neither enemies abroad nor rivals at home.”