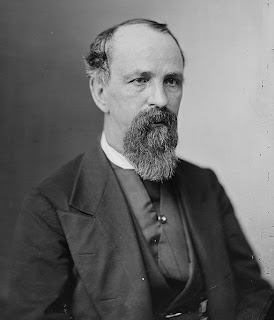 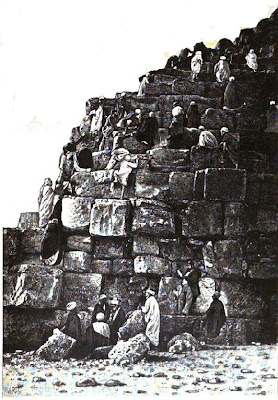 Remounting our animals we return to the base of the pyramids. We are pointed out, in a hole in the sand a rod off, the old corners before they were stripped. We look up to the apex of the large one, that of Cheops. Now its massiveness and height are felt. It is simply enormous. It is specific and general gravity. No room for levity of any kind. Made on a square, and with angles geometrical, and with immense stones - and these piled by the aid, likely, of mounds of earth, or, as some suppose, built from the inside - the impression deepens till the head is dizzy and top-heavy with solid substance, acres of stoniness. One feels, in a finite way, a sense of the labor and load by which they were made.
(...) The pyramids have three groups, and are about sixty in number. They are all within a circuit of twenty miles. I heard Professor Proctor declare that they were astronomical observatories, or stony telescopes. This has just this much truth, viz., that the opening is on the north side, and out of the dark tunnel in daytime the polar star can be seen. Others regard the large pyramid as a standard of measurement ; that the angles of its passages indicate latitude, based on the circumference of the earth, and the seasons and time. Some regard this pyramid as the result of inspiration, inasmuch as it squares the circle and has no element of idolatry ; that its measurements, on the basis of the English mile, are right to an inch, and that the infant eras of our world were more scientific than our maturer eras. It is even said that the temperature of the King's Chamber is 68° Fahrenheit, which is the mean temperature of the earth. We found it mean in many ways. Others hold that Job had this pyramid in his mind when God spoke to him about laying the measures of the earth, and that it was over this corner-stone of the universe that the morning stars sang together. Some have calculated that exactly one thousand million pyramids piled on each other would reach the sun. Of course this is absolute nonsense. The angles were made for rest to those who buried the king and queen, and who visited them after burial. The truth is that the pyramids are tombs, royal and gigantic, and nothing more. There were two places for ventilation. They are now closed.
The labor and expense bestowed by the ancient Egyptians upon their dead, make our monuments seem flimsy toys. The tombs are full of armlets, bracelets, rings, necklaces, and other varieties of handicraft. Out of the cerements, preserved by the bitumen, come flowers thousands of years old - so old that some of the species are lost to our world of botany.
Like Thebes and Heliopolis, this pageantry of death passes away. It leaves nothing but a few mouldering ruins - " like sea-shells where the ocean has been - to tell that the great tide of life was once there !"
After seeing these six pyramids in a group, and the other three groups in sight, one becomes as silent and thoughtful as the Sphinx seems to be. The immensity of the larger ones would not seem so great if they were Alps, or Atlas, or Lebanon mountains - God's handiwork. The largest one, the one we entered, is only 460 feet high and 15 feet square on its top. It covers thirteen acres. It employed 100,000 men ten years to make the causeway to transport the material for building ; and to build it 360,000 men twenty years ! It does not, however, compare with "Nord Cap" even, nor with the Cathedral Dome in the Yosemite. But the pyramids are man's work. God works geometrically in the petals of the flower, in the laminated foldings of the pearl, in the strata of the mountains, and in the evolution of the constellations ; but here, this simple big square, or triangle set on its larger end, now rough with rugged stones, though once glossy and smoothed by the same manual dexterity which lifted them in their geometric order, because man made it, becomes sublime by its work and its permanency. No demi-gods, no giants, piled up these honors to dead royalty ; but the ambition to be remembered made the kings of Egypt confiscate and press the labor of hundreds of thousands of slaves for a score or more of years ; and all that their mummies might be handed down for transportation among subsequent nations.
These monuments indicate the slavery of Egypt to the mysteries of royal and priestly control. Every Egyptian ruler began to reign by building his tomb. What chattels men and their muscles must have been, the Israelitish history demonstrates. Call it necromancy, witchcraft, spirit-causes, or the beginnings of science, it is certain that the masses of men in old Egypt were dumb cattle, driven by their rulers to build monuments to perpetuate royal glory. Even as late as the Ptolemies the social order of Egypt had its symbol in the pyramid. The whole structure was based on the labor of the many, with a "royal priesthood" as the apex ! Then, the child was owned by the mother, the married man by his wife, and even every corpse belonged to the priest. There was no individuality except at the apex ! Egypt was ruled by creeds whose mystery was in sacred keeping. To the profane vulgar this mystery was as awful as the features of the Sphinx, and as Delphic as the Greek letters over the portal of Apollo. They reverenced most who understood least.
Publié par Marc Chartier à 08:24