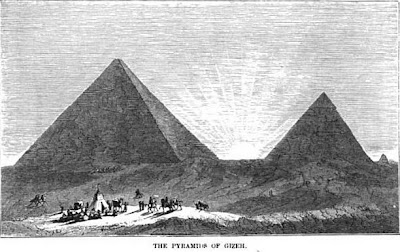 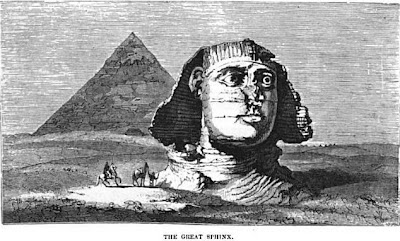 The only works of Egyptian architecture known are temples, palaces, pyramids, walls of inclosure, quays, and other public constructions ; private constructions, houses, etc., have disappeared in the lapse of time, either because they were built of clay or brick, or of some other as perishable material. The pyramidal or sloping line was a characteristic feature of the Egyptian style in temples and other buildings - the chief object of which was solidity. Another feature was the reed moulding, with lines cut obliquely on it, on the angles formed by the faces of the wall. The walls were surmounted by a projecting cornice. The solidity of Egyptian masonry is well known : it is the result of the good choice of materials, of its extraordinary size, and of the care bestowed on the building. It has been frequently remarked, that in the courses the neighbouring stones were attached to one another by plugs of wood, dove-tailed at each end, and imbedded in the stones.
(…) Mortar : The perfection of that of the ancients has passed into a proverb. The Egyptians never employed it in their great constructions ; but other monuments preserve traces of it : the pyramids were formerly covered with a coating which supposes its use.
(…) In the earliest ages the tumulus, or mound of earth, was the simplest form of sepulture for heroes and kings. The pyramid of stone was afterwards adopted by nations as the most lasting form of sepulture for their kings. Many ancient nations have raised pyramids. The form of the pyramid is well known. There is, however, this difference in the form, that some pyramids are raised with steps, others with inclined plane surfaces. The most celebrated are those of Egypt ; the Etruscans have also erected some, and the Romans imitated them. Some suppose the word puramis to bo derived from pur, fire ; others from the Egyptian "pehram", "the sacred place" : the Greeks, adopting the native name, and adding a termination of their own, it was converted into the Greek word Pyramis. According to Lanei, it is derived from "pi-ram", "pi" being the Coptic article ; tho word "ram", besides being a Semitic, is also a Coptic word, with the sense of "height".
All antiquity has admired the pyramids of the environs of Memphis. They are distinctly mentioned by the oldest succeeded each other. There has been much discussion with regard to their destination, but at the present day there are no further doubts on the subject : the pyramids were tombs. The faces of the three pyramids stand exactly opposite to the four cardinal points.
They are built of calcareous stone, partly from tho neighbouring hills. Granite was also employed for some portion of the outer part. The principal chamber in one of them is of granite. It was there that the sarcophagus of the owner of the tomb was found, in which his mummy was formerly enclosed. Many chambers and passages in different directions have been discovered in those which have been entered. The entrance of the pyramid was carefully concealed by an interior casing. In the interior the passages communicated sometimes with wells and deep subterranean passages excavated in the rock on which the pyramid was erected. It seems that some of them were covered over with stucco or marble, and that religious and historical subjects, and hieroglyphical inscriptions, were sculptured on them, but no trace of them remains at the present day.
The environs of Memphis not having, like those of Thebes, high mountains in which they could excavate the tombs of the kings, these factitious mountains were raised, and this explains their real destination.
The larger pyramid at Memphis, called that of Cheops, rises in a series of platforms, each smaller than the one on which it rests, thus presenting the appearance of steps. Of these steps there are 203. (...)
The second pyramid, generally attributed to Chephren, is smaller in size, and its style of masonry inferior to that of the larger pyramid. It stands on higher ground than the great pyramid. It was probably built by Shafre, whose oval has been found in one of the tombs near the great pyramid. The length of its base is 690 feet, and its height 446 feet. It retains a portion of the smooth casing with which all the pyramids were once covered. The passages in this pyramid lead only to one main chamber, in which is a sarcophagus sunk in the floor. This pyramid had two entrances. It was opened by Belzoni.
The third pyramid, that of Mycerinus, is about 203 feet high, and its base 333 feet long. The outer layers or casing were of granite, many of which still continue in their original position at the lower parts. The chamber has a flat roof, formed of stones placed one against the other. The name of Mencheres, its founder, was discovered by Colonel Vyse on a wooden coffin, which was found in this chamber, now in the British Museum. It was opened by Colonel Vyse. This pyramid is built in stages or stories, to which a sloping face has been afterwards added It has suggested a theory to Dr. Lepsius. 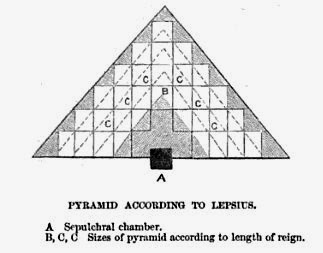 (…) According to Lepsius, the height of these royal monuments corresponded with the length of the monarch's reign under whom it was erected. We here quote his words :" It occurred to me that the whole building had proceeded from a small pyramid, which had been erected in stages of about 40 feet high, and then first increased and heightened simultaneously on all sides, by super-imposed coverings of stones from 15 to 20 feet in breadth, till at length the great steps were filled up so as to form one common flat side, giving the usual pyramidal form to the whole. This gradual growth explains the enormous magnitude of particular pyramids, besides so many other smaller ones. Each king began the building of his pyramid as soon as ho ascended the throne; he only designed a small one, to insure himself a complete tomb, even were he destined to be but a few years upon the throne. But with the advancing years of his reign, ho increased it by successive layers till he thought that he was near the termination of his life. If he died during the erection, then the external covering was alone completed, and the monument of death finally remained proportionate to the duration of the life of the king."
Mr. Bartlett (1), in his pleasing work on Egypt, has advanced an objection which is somewhat fatal to this theory ; his words are : " It appears inconsistent with the construction of the great pyramid of Cheops, since the existence of a series of interior passages and chambers, and even air passages communicating with the exterior, seems to argue a regular design for the construction of the entire monument."
It would be more natural to suppose that their relative sizes were in accordance with the rank and popular estimation of the deceased.