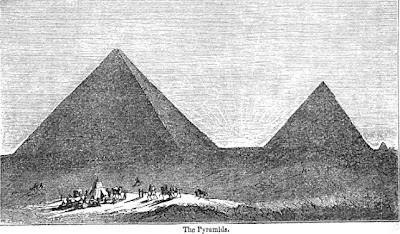 A conspicuous object as we approached the pyramids was an old ruined causeway, most probably a part of that which was built by Kara Koosh for the convenience of transporting stones from the pyramids to Cairo, when he constructed the citadel, and third wall of that city ; and this portion may have been raised on the ruins of that which Herodotus describes, as the more ancient causeway was raised for the purpose of facilitating the conveyance of stones from the quarries on the eastern side of the Nile to the site of the Great Pyramid, to line the passages of that structure, and perhaps to case its exterior. (…) The height of the Great Pyramid is not much greater than that of the second : the former having lost several ranges at the top ; while the upper part of the latter is nearly entire : but the base of the former is considerably larger ; though the difference is not very remarkable to the eye, and in the solidity and regularity of its construction, it is vastly superior.
(…) About the middle of eachside of the pyramid, the exterior stones have been much broken by the masses which have been rolled down from above ; but at the angles they are more entire, and there, consequently, the ascent is not difficult. The upper and lower surfaces of the stones are smoothly cut ; but the sides have been left very rough, and in many cases, not square : the interstices being filled up with a coarse cement, of a pinkish colour. This cement is, in some parts, almost as hard as the stone itself ; and sometimes very difficult to detach. Among the dust and small fragments of stone which have crumbled away from the sides and yet rest upon the upper surfaces of the steps, or exterior stones, we find a great number of the small petrifactions in the form of lentils, which I have before mentioned. 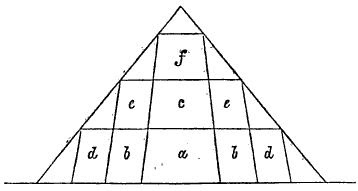 Dr. Lipsius [Lepsius] lately gave, at a meeting of the Egyptian Society in this city, a very interesting account of the mode in which the Great Pyramid, and similar monuments, appear to have been constructed, as suggested by Mr. Wild, an English architect, accompanying the Doctor. The following engraving will explain the description of the system which appears to have been adopted. A structure of moderate size, a, with its sides slightly inclining inwards, containing, or covering the sepulchral chamber, and with a flat top, was first raised. Then a structure, bb, of the same height as the former, with its exterior sides similarly inclined, and its top flat, was raised around. Next, another structure, c, was raised on the first. Another circumstructure, dd, was raised around that marked bb ; then another, ee, around the structure c, then another structure, f, upon the latter. After this manner, the building probably continued to increase (like the royal tombs at Thebes) as long as the founder reigned. The structure was finished, as Herodotus says, from the top downwards. A small pyramid being constructed on the top, occupying the whole of the highest platform, and the angles formed by the other platforms, and the sides of the structures against which they were built being filled up, the simple pyramidal form was made out. The several platforms composed convenient ample stages on which to raise the massive stones employed in the construction. This mode of construction was certainly practised in some of the pyramids, and most probably in all, excepting those of very small dimensions. That the Great Pyramid and others originally presented plane sides has been proved by Colonel Vyse.
(…) Herodotus, and several other ancient writers, inform us that the quarries of the Arabian mountains supplied materials for the construction of the pyramid. Indeed, they assert that the pyramid was entirely built of stones from these quarries ; but this, evidently, was not the case : the stone of which the structure is mainly composed was quarried from the rock in its neighbourhood. (…) The dimensions of the Great Chamber are especially worthy of remark : the length is thirtyfour feet four inches and a half ; just twenty ancient Egyptian cubits ; the width exactly half that measure. The height is about two feet more than the width. It is entirely constructed of red granite. Near the western end is the sarcophagus ; which is also of red granite. It is seven feet and a half in length, three and a half in breadth, and the sides are half a foot thick. No hieroglyphics nor sculptures of any kind adorn it either within or without ; its sides are perfectly plain and polished, and its form is simply that of an oblong chest, in every way rectangular. Its lid has been carried away, as well as its original contents ; and we find in it nothing but dust and small fragments of stone. It has been much injured at one of its corners by a number of travellers, who have broken off pieces to carry away as memorials. When struck with anything hard, or even with the hand, it sounds like a bell. It rests upon a block of granite considerably larger than any of the other blocks of which the floor is composed. Why was such an enormous mass placed there ? The alabaster sarcophagus in the great tomb opened by Belzoni in the valley of Beeban-el-Mulook, at Thebes, closed the entrance of a deep descent of steps, which has never been explored to its termination : the soft and crumbling nature of the rock through which it is cut rendering any attempt to clear it out extremely dangerous. The enormous mass of granite under the sarcophagus in the Great Pyramid may have been placed there for a similar purpose, or to cover the mouth of a vault or pit ; so that, in case any violater of the sacred edifice should succeed (notwithstanding the portcullises of granite), in effecting an entrance into the Great Chamber, he might, on discovering the sarcophagus, believe the object of his search to be accomplished. An excavation has been made (I believe by Col. Howard Vyse), beneath this huge stone, but it seems hardly to have been carried sufficiently far. The sides of the chamber are formed of six regular courses of granite blocks, which are united with the greatest exactness, and their surfaces are perfectly even and polished, without hieroglyphics or any other inscriptions or ornaments. In the northern side near the corner of the entrance is a small aperture, and opposite to it in the southern side is another. Col. Vyse discovered the termination of each of these, in the exterior of the pyramid : they seem to have been designed for the purpose of ventilation. 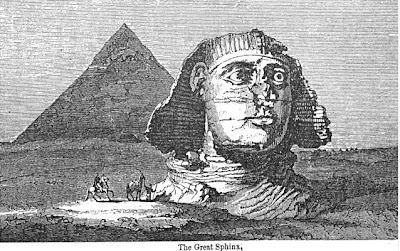 (…) Returning from this chamber we stop at the platform at the upper end of the Grand Passage. Here we observe at the top of the eastern wall (that is on the left of a person facing the end of the passage), at the height of twenty-four feet, a square aperture which is the entrance of another passage. Small notches have been cut at the corner, all the way up, for the reception of the ends of short pieces of wood, which were thus placed one above another so as to form a kind of ladder. These have been taken away, and the ascent without them is difficult and dangerous.
(…) Such is the description of all that is now known of the interior of the Great Pyramid. It has been calculated that there might be within this stupendous fabric, three thousand seven hundred chambers, each equal in size to the Sarcophagus Chamber, allowing the contents of an equal number of such chambers to be solid, by way of separation. Yet this enormous pile seems to have been raised merely as a sepulchral monument, to contain, perhaps, one single mummy, not a particle of which now remains in the place in which it was deposited with so much precaution ; unless there be yet undiscovered any other receptacle for the royal corpse than the sarcophagus in the Granite Chamber.
(…) [The Second Pyramid] is but little inferior in magnitude to the first. From some points of view, it even appears more lofty, as it stands on ground about thirty feet higher than that on which the first rests, and its summit is almost entire. A large portion of its smooth casing remains on the upper part, forming a cap which extends from the top to about a quarter of the distance thence to the base. Notwithstanding this, Arabs often ascend to its summit ; and many European, travellers have done the same. In its general construction, this pyramid is inferior to the first, and its interior is less remarkable. By a sloping passage, similar to the first in the Great Pyramid, but cased with granite, and then by a long horizontal passage hewn through the rock, broken by two perpendicular descents, and sloping ascents, we reach the Great Chamber.This is similar in form to the "Queen's Chamber" in the Great Pyramid, and contains a plain sarcophagus of granite, among blocks of the same material lately torn up from the floor, in which, the sarcophagus was embedded.
(…) The third pyramid, commonly attributed to Mycerinus, or Mencheres, was opened by Colonel Vyse, who found in it the mummy-case of its founder, bearing the hieroglyphic name of Menkare. This pyramid, though small in comparison with the first and second, its base being about three hundred and thirty feet, and its perpendicular height about two hundred, is a very noble monument. Its construction is excellent ; and it was distinguished by being partly, or wholly, cased with granite. Several courses of the granite casingstones remain at the lower part. The chamber in which the sarcophagus was found, and the entrance passage are formed of granite ; and the roof of the former is composed of blocks leaning together, and cut so as to form an arched ceiling. The sarcophagus was lost at sea, on its way to England. The third pyramid was the first that I entered ; and highly was I gratified by the view of its interior, after I had summoned courage to crawl through its entrance, which was almost closed by huge masses of stone.
Publié par Marc Chartier à 16:43